A Trifecta of Strong Domestic Data Buoys the US Dollar

The market is hoping a swift resolution to recent steel and aluminium tariffs before officials vote on USMCA. Today, strong performance in the oil futures market and manufacturing sales are supporting the loonie. The pair is however expected to remain inside recent ranges. 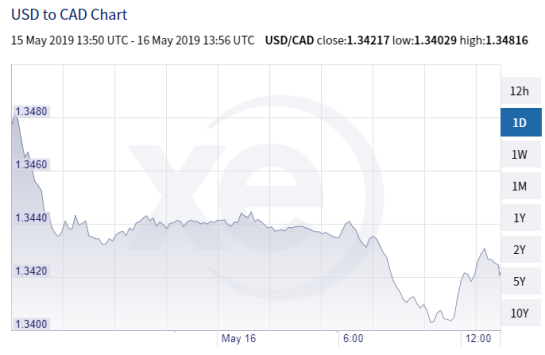 The greenback maintains a positive tone, buoyed by robust domestic data and ignoring escalating trade tensions. Unemployment weekly claims saw a decrease of 16k from the previous week. Building permits beat market consensus and the Philly Fed Manufacturing Index was at 16.6 for May, increasing from a reading of 8.5 in April.

The survey sees the continued growth of the coming months, ignoring raging trade tensions with China.  The US dollar index is closing on a two week high as the market continues to digest the incoming data. Trade talks between Beijing and Washington are still at centre stage. New non-tariffs measures between the two parties are expected to inject more uncertainty.

GBP/USD skidded to a three-month low with frustrations growing over the ongoing Brexit stasis. The pair is now hanging by a thread around key 1.28 handle and remains under heavy selling pressure. PM May is facing new calls for her resignation, whilst the MPs do not believe a fourth vote for the same exit plan will result in a different outcome.  British politics and global trade tensions are expected to encourage more outflows from the pound.

The Euro is trading flat against the US dollar around recent 1.12 level. The economic calendar is thin, and the market prefers to continue to move with measured optimism. The US Administration has delayed its decision for auto tariffs for another six months. Growing tension in international trade relations will keep the pair inside the consolidation zone.

USD/CAD is meeting stiff resistance near the upper range of the new range and is now trading with a negative bias. The pair is down 0.15% with the Canadian dollar drawing strength from rising oil prices. WTI NYMEX is up nearly 1.5%.

Manufacturing sales were also better than market estimates, up 2.1% as per Statistics Canada. The growth was broad-based, with sales up in 12 of 21 industries. The market will now turn its attention to the Bank of Canada Financial System Review report for further trading impetus.

The AUD clings to the 0.69 range despite a higher-than-expected unemployment rate of 5.2 in April. Employment news was mixed in April, as the number of people employed rose by 28,400, which is higher than the 15,000 forecasts. Full-time employment fell by 6,300, and part time employment rose by 34,700.

Dollar-yen is still trading inside recent ranges, with little on show in the economic docket. Japanese Producer Price Index released earlier this morning rose by 1.2% over the last twelve months but was unable to influence the market. The Bank of Japan is also not expected to make any monetary policy changes at least until the spring of 2020. Trade remains the central theme driving the currency pair.