The US Dollar Rebounded, but Don't Touch that Mouse Button

The US Treasury Secretary believes a trade deal is nigh, which pushed the US dollar to a two-day high. The Canadian loonie consolidates against the USD.

The British pound is sliding to a three-session low today, marking a major technical reversal in fortune amidst growing prospects of a no-deal Brexit. The EU has recently clearly indicated that they are not open to discussing, nor revisiting the Withdrawal Agreement.

Boris Johnson, likely the next British PM, somehow believes a new improved deal is possible despite previous failure to do so. He also signalled that the option to leave the EU on Oct 31st without any agreement is also a real possibility. With Brexit uncertainty expected to linger on, we expect the Sterling to remain under pressure over the summer. 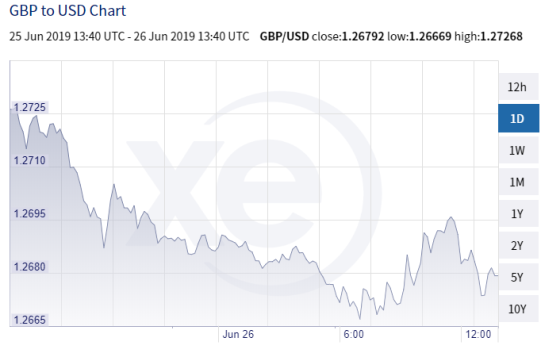 The US dollar is building on yesterday’s rebound, buoyed by positive comments from members of the Fed and the US Treasury Secretary. The latter signalled that the US and China are 10% away from clinching a trade deal. The most dovish of the Fed members, Bullard, believed a 50 basis point rate cut is off the charts as the economy needs only minor “insurance cut”. The market seems to largely ignore today’s announcement:  new orders for manufactured durable goods fell 1.3% in May. The market's focus will be on the upcoming G20 meetings and the prospects of a trade agreement between the two largest trading partners.

The Pound is trading 0.15% lower this morning in reaction to growing fears of a no-deal Brexit. Boris Johnson re-affirmed his commitment to getting the UK out of the EU by October 31st with a "deal or no deal" pledge.  We expect a final tussle between the two parties and further downside for the Sterling over the coming months.

EUR/USD continues to slide lower as the greenback makes a timid comeback on month-end portfolio rebalancing flows. The Gfk Consumer Climate Study is predicting a slight drop to 9.8 points for next month, down from a June figure of 10.1 points. Consumers are expected to buy more despite fears of job losses in the short term. The economic mood is meanwhile stabilising despite uncertainty over Brexit.  As we noted last time, the pair needs a major positive switch in economic fundamentals to push above the 1.14 handle.

USD/CAD consolidates around the four-month low with the greenback attracting bids on the back of a slight change on sentiment.  The US Fed will be data-dependent and is not expected to rush on chopping down interest rates. The market is also starting to price in a de-escalation in trade tension between the US and China. The loonie is under pressure after Chinese authorities imposed a “temporary” ban on meat imports. The pair is expected to remain within recent ranges ahead of the release of Canadian GDP figures.

AUD USD continues to strengthen but is struggling to breach above 0.70. Strong signals from Treasury Secretary Steve Mnuchin that the US and China are 90% to a trade deal is holding the Aussie dollar back as G20 meetings approach. A meeting between Presidents Trump and Xi are causing many an investor to go to the pantry for popcorn and candy.

The greenback is showing its best performance in four sessions, trading 0.4% higher this morning. The Fed continues to send signals that they are in no rush to loosen the rates. New positive developments between the US and China are also encouraging risk-on trades and weighing on safe-haven currencies. The economic calendar remains light today and we expect the pair to trade with a positive bias with 108 in sight.