The Euro Slumps to Six-Day Lows on Economic Outlook

EUR/USD broke below its recent consolidation range, down 0.5% on the day. The pair came under heavy selling pressure after business confidence took a new hit, output weakening in April. The economic situation in Germany is hardly improving: manufacturing dropped for the third month in a row while the service sector is the only bright spot. With the growth within the euro bloc stalling, we expect the currency to trade with a negative bias. 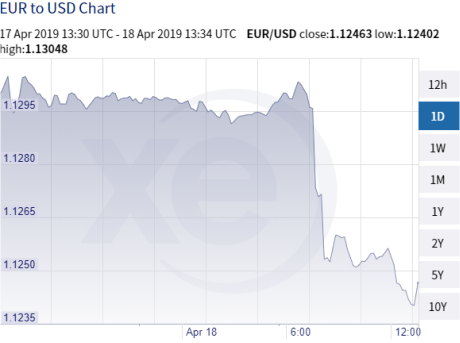 The US dollar is trading higher across the board, fuelled by better-than-expected retail sales and jobless claims numbers. The Dollar Index advanced 0.40% after a report showed US retail sales improved by 1.6% in March from the previous month. Unemployment claims dropped to its lowest level in nearly 50 years. The latest set of data cements the fact that the US economy is moving on a different track compared to the Eurozone. EU PMI remains weak with exports contracting further. Trade tensions between the EU and the US are likely to come into play in the near term. The Euro is under intensive selling pressure, down 0.5% on the day, after breaking key 1.13 handle.

The British pound is hanging by a thread, hugging the 1.30 post. GBP/USD initially got a boost with the UK reporting higher retail sales numbers. The quantity purchased increased by 1.1% helped by milder weather. However, investors remain cautious ahead of expected Brexit developments and ignoring noises. The UK Parliament is in recess until April 23rd.

The Euro bloc is finding it hard to move out of the sluggish economic situation. EUR/USD slumped below the 1.1300 handle after PMI Composite Output Index weakened to a 3-month low at 51.3. Business confidence is depressed over concerns of political uncertainty, Brexit and waves of trade protectionism.

The Euro is the weakest G10 currency and is expected to search for new lows as the market continue to assess the single market's economic outlook.

USD/CAD is up 0.3% on the day after US core retail sales easily beat market expectations. Canadian retail sales were also up after three consecutive monthly declines. The increase was broad-based and offered initial support to the loonie. However, we expect the pair to return to recent familiar ranges once the dust settles.

The AUD/USD pair continued its slide from 0.7200 and hit session lows in reaction to mostly positive US data. The pair continued to struggle to leverage its momentum beyond 0.700.

Dollar-yen is lower, unable to continue its momentum above the 112 mark. Fear that the Eurozone could be in deeper economic trouble is encouraging flows into safe-haven assets. Meanwhile, stronger employment growth in Japan contributed to a better-than-expected PMI reading. The Flash Manufacturing PMI data came in at 49.50, however, remains below the 50 boom/bust level. Profit taking and short covering ahead of the long weekend will continue to keep a lid on any upside move.