The currency market is steady and continues to assess the impact of recent attacks on oil processing centres and flare-ups in geo-political relationships.

The currency market is holding steady, and it continues to assess the impact of recent attacks on oil processing centres and flare-ups in geo-political relationships. Gold consolidated around $1500.00 an ounce. 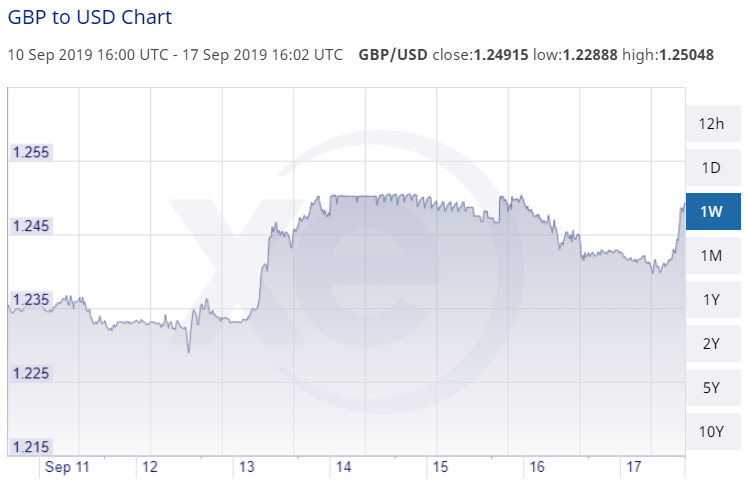 The US Dollar Index (98.75) is flat this morning with the Australian dollar among the weakest currencies. Oil prices seem to have stabilised following yesterday’s surge to a five-month high. The FOMC is expected to take centre stage tomorrow when it concludes its two-day meeting. As a result, we expect currency movements to be restricted within recent ranges. The US session will see the release of capacity utilisation rate and the market is anticipating an improvement in industrial output for the month of August.

Sterling is wobbly as Brexit-related news continues to drive market sentiment. There was little progress after PM Johnson met with EU officials, reviving fear that the UK could be headed for a disruptive exit. There is no core data release on the cards today and the Bank of England is unlikely to depart from its current monetary policy stance this week.

Be sure to watch Ciaran Pennington's 1 Minute Market update for the lowdownon the European currency scene.

EUR/USD continues to explore the lower levels around key 1.10 in the absence of major market-moving data.  The was a slight improvement in ZEW Indicator of Economic Sentiment for Germany (now at minus 22.5 points) but the near-term outlook is still pointing to the downside. The details of the September survey showed the German economic situation worsening by 6.4 points with the indicator now at its lowest reading since May 2010. Global trade tension and uncertainty around Brexit will continue to weigh on the euro.

USD/CAD has hardly moved from yesterday’s close, consolidating around the mid-point of 1.32s. The loonie showed very little reaction despite WTI crude oil futures climbing 13 points higher to nearly $65 a barrel yesterday. This morning manufacturing sales data declined 1.3% in July, following the 1.4% drop in June. In the absence of tier 1 data, we could see pressure building on the CAD.

The Australian Dollar is having a sinking spell today but did recover slightly. The minutes from last week's RBA meetings were less than optimistic, yet the AUD USD pair closed at 0.68565.

The greenback climbs above the 108 handle versus the Japanese Yen as the market sees a return to tranquillity (at least temporarily). There is also pressure building on the JPY as a result of growing uncertainty in a US-Japan trade deal. Investors will now prefer to wait before betting on any directional move in the USD/JPY. The focus will steadily switch to tomorrow’s US Federal Reserve monetary policy meeting