The Dates you Need to Know in the Spanish Calendar

Just like the UK, the Spaniards have their own calendar of national and regional public holidays to celebrate various events. Whether you moved to Spain permanently or are just there for a fleeting visit, this calendar will help you understand what events are happening when, and the ways that different events are celebrated so you can get involved in the action – or avoid times that are likely to be more expensive for tourists. 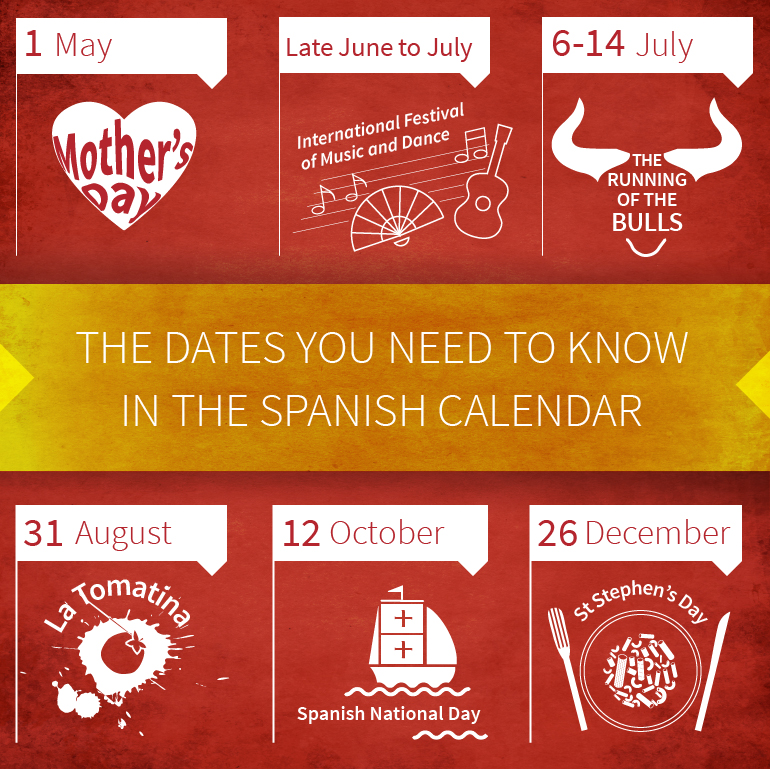 Just like the UK, the Spanish celebrate the first day of a new year with a bank holiday.

Epiphany Day celebrates when the Three Kings or Wise Men brought gifts to Jesus at the Nativity. Unlike the UK,  most children have presents at Epiphany, although some are opened on Christmas Day. On Epiphany Eve, the children leave their shoes out to be filled with presents.

Also known as Andalucia Day, this regional holiday marks the anniversary of a referendum held on February 28th 1980, in which the Andalucian electorate voted for the statute that made Andalucia an autonomous community of Spain.

Las Fallas (The Festival of Fire) is a traditional celebration held in commemoration of Saint Joseph every year in the city of Valencia. The term Fallas refers to both the celebration and the monuments burnt during the celebration.

This holy day is a regional holiday celebrated in Castilla-La Mancha, Galicia, La Rioja, Madrid, Melilla, Murcia and Valenciana only.

The Semana Santa is a week-long celebration during the last week of Lent, leading up to Easter weekend. Catholic religious brotherhoods and fraternities perform penance processions on the streets of almost every Spanish city and town. The most glamorous celebrations can be found in Andalucia, particularly in Malaga and Seville, whilst Castille and  León see the more sombre processions. A common feature in Spain is the usage of the nazareno or penitential robe for some of the participants in the processions. This garment consists of a tunic, a hood with a conical tip used to conceal the face of the wearer, and sometimes a cloak.

Maundy Thursday commemorates Jesus’s last supper with his disciples, and is generally a national holiday in all regions except Catalonia.

Similarly to the UK, Good Friday is a national holiday in Spain that commemorates the Crucifixion of Jesus. Traditionally, meat is not eaten on Good Friday.

The last day of the Semana Santa, Easter Monday is a national holiday like it is in the UK.

Spring Fair, the Feria, comes two clear weeks after Semana Santa. The Feria is a joyful festival with masses of food, drink, music and dancing.

Although Mother’s Day is celebrated in most places across the world, it is worth noting that it is held almost two months later in Spain than in the UK.

A celebration of flamenco and classical music that traces its origins back to the 1880s, and combines the vibrant energy of Spanish guitars, castanets and flamenco dancers.

Madrid’s main annual festival is San Isidro, which includes nine days of celebrations as well as the start of the capital’s bullfighting season. Madrileños dressed in traditional gear head for the Plaza Mayor, where there is traditional dancing and open air concerts. Casa de Campo, the large park to the south west of the centre, hosts rock concerts during the fiestas and there are various events throughout the city.

The fiestas of San Fermin are celebrated in Irunea and Pamplona in the region of Navarra every year. They have become internationally known because of the running of the bulls, where the bulls are led through the streets of the old quarter as far as the bull ring by runners.

Better known as the Virgen de la Paloma Festival in Spain, the feast of the Assumption has been celebrated since the 18th century. The festivities begin on August 11th and conclude on the 15th with a grand celebration in the streets of Madrid.

This messy food fight festival is held on the last Wednesday of August each year in the town of Bunol near to Valencia. Thousands upon thousands of people make their way from all corners of the world to fight in the ‘World’s Biggest Food Fight’ where more than one hundred tonnes of over-ripe tomatoes are thrown in the streets.

The Fiesta Nacional de España is the national day of Spain. It is held annually and is a national holiday. It commemorates the anniversary of Christopher Columbus’s first arrival in the Americas, a day also celebrated in some other countries, but not in the UK.

This particular public holiday centres around remembering deceased family members. Most people will visit the graves of relatives and decorate them with elaborate floral displays. Roads around cemeteries will be crammed with traffic, flower sellers line the streets and, in many places, additional public transport services are organised.

Constitution Day commemorates the National Referendum of 1978 to approve the draft constitution that was the gateway to democracy in Spain. Around 87% of the Spanish people voted in favour of the Constitution.

The Feast of the Immaculate Conception, or the Dia de la Inmaculada Concepcion, as it is known in Spain, is a feast of the Roman Catholic Church. It is a national holiday where Catholics celebrate the miraculous conception of the Virgin Mary. A large percentage of the Spanish population are Roman Catholics so for many people it is considered to be an important day.

On St Stephen’s Day, workers in Barcelona, the Balearic Islands, and Catalonia have a day off. It’s common for friends and family to join for a meal to celebrate the day. Typical meals for the feast include a Canelloni pasta dish and leftovers from Christmas Day.

This is the Spanish equivalent of April Fools’ Day.

This calendar is definitely worth keeping in mind when you are booking in important meetings or planning on travelling anywhere. It is also worth noting that the prices of hotels and trains are likely to rise during these dates, so make sure you plan in advance. One thing is for sure though, XE will still offer you excellent rates for international money transfers, whatever the time of year.