International Online Money Transfer 101: Back to The Basics

A fundamentals guide about money transfer, and how foreign currency markets influence the cadence of currency values related to international payments.

It's hard to believe, yet after nearly eight months of building and nurturing the XE blog into an evolving repository of rich financial services insights, we have yet to publish a "fundamentals guide" about money transfer, and how foreign currency markets influence the cadence of currency values as they relate to international payments.

So here it is!

But first, let's take a quick look back at the foreign exchange market, and then we'll help you navigate what a money services business, otherwise known as an international money transfer provider does, and how we do it (and quite well, according to our 5-star rating on TrustPilot.) 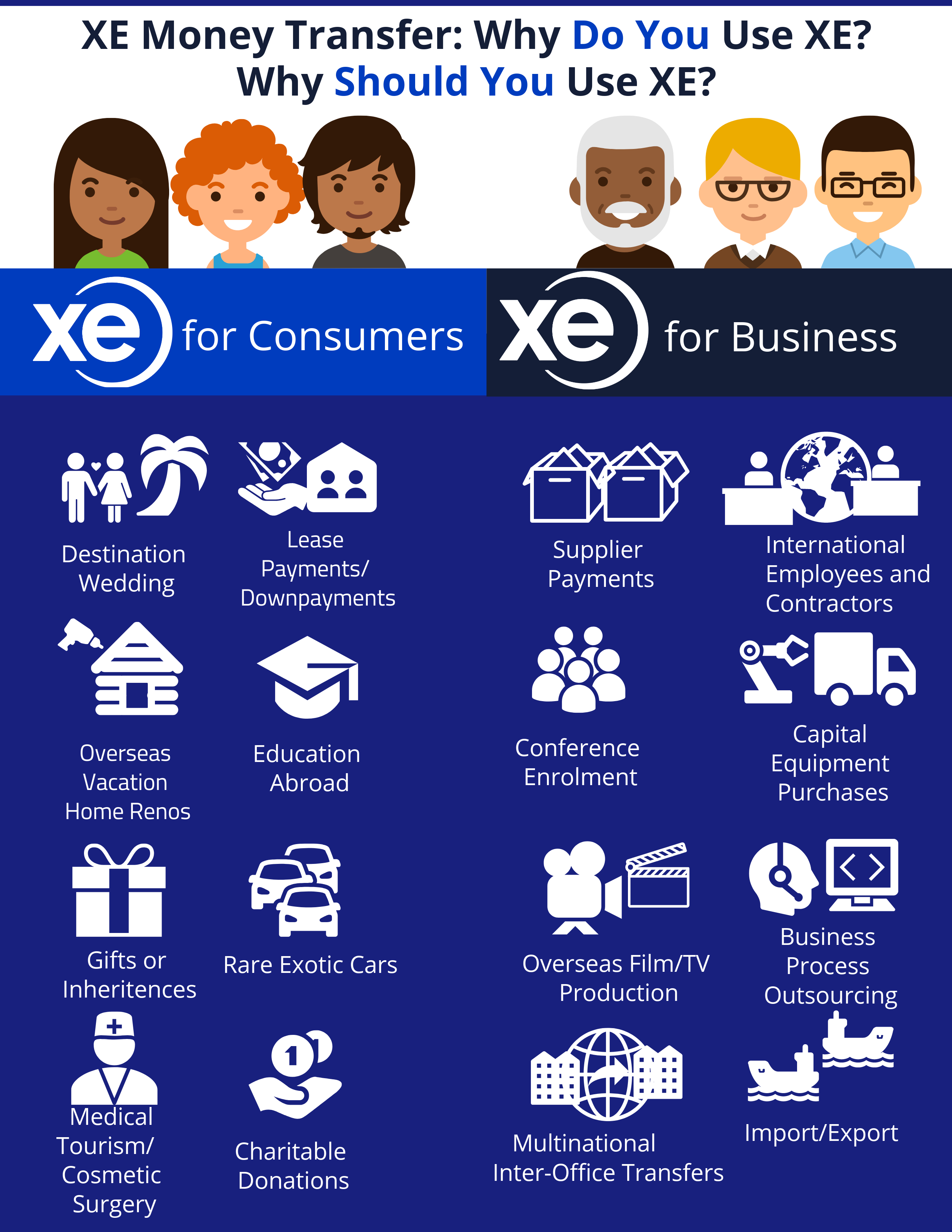 It's difficult to believe, yet historians can trace the exchange of foreign currencies to way back in the 4th Century. Coins and even paper currency was valued based on a number of factors, such as how much gold was in a coin, or other arbitrary value factors. It wasn't until 1867 that the world's first international monetary system was founded in Paris at a conference of leaders of the world's major economies of the day:

Many years later, in the first quarter-century, the gold standard was established to determine currency values of the world's strongest economies. No longer would a coin's value be determined by the gold within it, it would be measured by how much gold a country's government holds. This later evolved to valuations based on how much gold the US government held, then to the monetary policies of international central banks.

How Currency Value is Determined

It's a complex topic, however today's currency value is determined by the confidence and demand for a currency by investors, and as influenced by a country's central bank.

That confidence, and the demand which arises from it is influenced by several key factors:

The world's banks take policy direction from central banks, and from regulatory standards as set by organizations like the UK Financial Conduct Authority, the US Financial Crimes Enforcement Network (FinCEN) and others. These currency values are often positioned relative to each other for those who are traveling abroad, or that have business affairs with a third party in a foreign country.

XE gets rates from over 100 international sources, and processes them in our "XE Rate Blender" algorithmic engine. This ensures that our currency data reflects accurate global rates. Our "Money Transfer Rates" (often referred to as tradeable rates) are different from the live market rates you see on the XE Currency Converter page, which is the "spot rate" which is described in the "Jargon Buster" chart below. 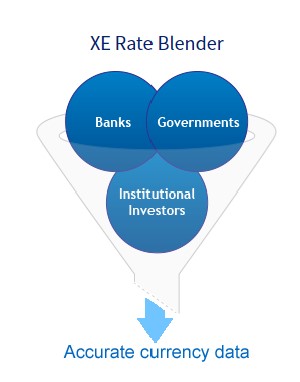 Examples include the US dollar compared to the British pound, often depicted as GBP USD, or USD GBP (see the definition of Base Currency and Counter/Quote Currencies in the chart below). Here is a foreign exchange conversion chart which compares the GBP to USD over the past 10 years. Note how the pound's value fell significantly right around the fateful day of the Brexit referendum. 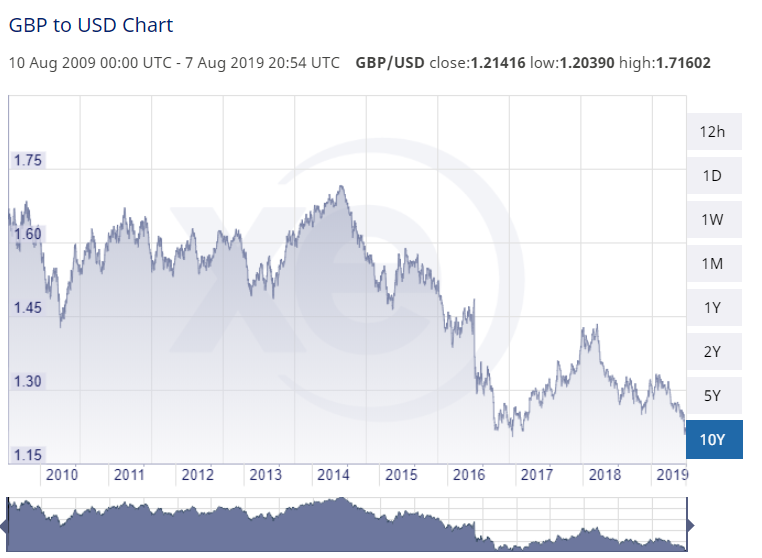 Common Terms about International Money Transfer You Need to Know

We've collected some common terms about international money transfer and international payments which you may hear when talking with a foreign exchange expert or other money services business professional.

XE does not act on behalf of speculative currency traders. We do, however consult with our business customers on risk and policy management as it relates to foreign exchange and international payments. No bank fees, reasonable rates, and transparent, regulated processes.

With over 25 years of foreign exchange and international money transfer experience worldwide,  XE hasn't just earned the reputation of the world's most trusted currency authority, we strive to reinforce that reputation every day. We empower individuals to live their best international lives, and businesses to succeed in the global marketplace.

.tg {border-collapse:collapse;border-spacing:0;border-color:#aabcfe;}
.tg td{font-family:Noto, sans-serif;font-size:14px;padding:10px 5px;border-style:solid;border-width:1px;overflow:hidden;word-break:normal;border-color:#aabcfe;color:#669;background-color:#e8edff;}
.tg th{font-family:Arial, sans-serif;font-size:14px;font-weight:normal;padding:10px 5px;border-style:solid;border-width:1px;overflow:hidden;word-break:normal;border-color:#aabcfe;color:#039;background-color:#b9c9fe;}
.tg .tg-zv4m{border-color:#ffffff;text-align:left;vertical-align:top}
.tg .tg-hmp3{background-color:#D2E4FC;text-align:left;vertical-align:top}
.tg .tg-q2ja{background-color:#D2E4FC;border-color:#ffffff;text-align:left;vertical-align:top}
.tg .tg-5crt{font-size:28px;border-color:#ffffff;text-align:center;vertical-align:top}
.tg .tg-nvcu{background-color:#D2E4FC;font-size:14px;border-color:#ffffff;text-align:left;vertical-align:top}
.tg .tg-0lax{text-align:left;vertical-align:top}
Foreign Exchange (FX) Jargon BusterAsk Rate or Ask Price
The exchange rate at which a foreign exchange (FX) provider will sell a currency to you. Also known as the offer rate. A lower ask rate is preferable for a customer, since it means you will have to pay less to purchase a currency.Base CurrencyThe first currency in a currency pair. The value of the base currency is set at 1 in a quote, and the price at which the two currencies can be exchanged is reflected in the quotee currency. If the EUR/USD rate is 1.10, for example, then 1 euro costs 1.10 US dollars.Bid Rate/Buy Rate The exchange rate at which an FX provider will buy a currency from you. A higher bid rate is preferable for a customer, since it means you will receive more for the currency you are selling.Bid/Ask SpreadThe difference between the bid rate and the ask rate.Counter Currency or Quote Currency
The second currency in a currency pair. It is the price for purchasing one unit of the base currency.Cross RateAn exchange rate between two currencies that is calculated on a third currency. It often refers to an exchange rate that does not include a country's domestic currency.Forward ContractA contract for which the buyer and seller agree to an exchange rate today, but the settlement date is more than two business days in the future. If the price of tthe currency pair changes between when the contract is formalised and when it settles, both parties are still committed to the rate specified in the contract.HedgeA hedge is an investment that is used to offset potential gains or losses associated with the risk of another investment. Companies often use a forward contract to hedge against currency rate fluctuations in the future.Limit OrderA transaction where the customer sets the price and the order is open until the market reaches that price. At that point, the order is filled as a spot transaction.MarginA deposit required on foward contracts as collateral to cover the risk associated with potential exchange rate movements. Also used to refer to the markup an international money transfer services provider adds to a transaction.Speculative Trading or Spec TradingEntering into an FX contract with the intent of profiting off the movement of a currency's value.Spot Price or Spot RateThe current market price for a currency pair.
If you have an international payment to make to propel your international life forward, open an XE personal account today. Or give your business a competitive edge by opening an XE business account.