What is your Working Time Worth in Spain?

A career in Spain, with its Mediterranean lifestyle, is becoming increasingly popular for Britons who want to live and work overseas. According to Prospects.ac.uk, almost 300,000 British citizens are currently living in Spain.

Due to the popularity of Brits moving to Spain, our team of experts have taken a look at how the job market compares in contrast to the UK, from salaries to work-life balance, to provide a full overview of the key differences between the UK and Spain when it comes to working life.

Average salary differences between the UK and Spain

For the tax year ending April 2015,  the Office for National Statistics reported in their Annual Survey of Hours and Earnings that the median gross annual earnings for full-time employees in the UK was £27,600, which is an increase of 1.6 per cent from the previous year. Moreover, the median gross weekly earnings for full-time employees was £528, up 1.8 per cent from £518 in 2014.

Average salaries will of course also differ between job sectors. So to gain a more accurate average wage, it’s worth doing some additional research using a salary calculator to factor in other things alongside your basic level pay, such as your pension scheme, holiday entitlement, bonuses and any flexible working patterns.

In the UK, according to the latest Gov.uk holiday entitlement rights report, almost all workers are legally entitled to 5.6 weeks’ paid holiday per year, with some employers choosing to include the 8 public/bank holidays as a part of the employee’s statutory leave. This works out at 28 days paid annual leave per year, based on a 5-day working week, but this can vary slightly dependent on your contract and how long you have worked at your organisation.

Although the average salary in Spain is not as high as in the UK, their holiday allowance is generally quite generous, with the typical worker being entitled to 30 calendar days of annual leave and 12 paid bank holidays. Some regions even have local and state holidays on top of the usual national bank holidays. Also, when it comes to getting wedded, Spanish employees can enjoy up to 15 calendar days holiday for their marriage.

Working time also differs slightly between the UK and Spain. The normal working hours for Spanish workers must average 40 hours per week maximum of actual work, according to Expatica. It is also possible for working time to be spent irregularly in Spain, which is becoming increasingly popular. This means that people can work longer hours during periods of higher work demand and then work shorter hours on other occasions.

Whereas in the UK, the limit is a little higher at 48 hours a week on average, but you can choose to work more by opting out of the 48-hour week. Exceptions will also be made for certain types of employment, for example but not limited to, the armed forces, security and surveillance, and where working time is not measured and you are in control of your own hours.

Business hours differ between Britain and Spain too. A standard working day in Spain begins around 9am-9.30am and finishes at 8pm, with an average 2 hour lunch break between 2pm-5pm whilst the sun is at its height. The traditional siesta is still very prevalent within Spain, which gives locals the opportunity to recuperate from a busy working morning and get back to work when the climate is a little bit cooler.

The summer months of July and August are also rather slow for business in general, with shortened working hours being the norm across many businesses. Therefore, although the average daily working hours are longer than here in the UK, there are other benefits such as a potentially much longer lunch and later starting times.

Where has the best work-life balance?

According to the OECD Better Life Index, Spain ranks above average in work-life balance, but below average in skills, jobs and earnings. As a result, Spain was voted the world’s second best for work-life balance by the OECD last year, due to Spaniards who work full-time devoting a greater portion of their day, in fact more than 16 hours, to leisure and personal care such as eating and meeting friends than any other country in the world.

In Spain, only a small 6 per cent of employees work very long hours, whereas in the UK, working hours are generally longer and out of hours work is popular. The busy nature of Britain’s economy and fast-paced businesses mean that employees do tend to work longer hours, however the British are increasingly becoming aware of the work-life balance issues and many organisations are introducing policies to help reduce the pressure of work on workers private lives.

Although generally the work-life balance is greater in Spain, when it comes to money, the gap is quite wide between the richest and the poorest. According to the OECD, the top 20 per cent of the population earn close to seven times as much as the bottom 20 per cent. Also, workers face a much higher (17.8 per cent) chance of losing their job in Spain, meaning job security is below average in comparison to other countries.

However, in general Spain remains one of the favourite holiday spots in Europe, and is very popular with expats, which in turn will have an effect on the job market, especially in the tourism industry.

What kind of job opportunities are there in Spain?

As with many countries, a good education and skill set are important fundamentals for finding a job in Spain, with the OECD stating that 55 per cent of adults aged 25-64 have completed upper secondary education.

However, Spain’s unemployment rate is one of the highest in Europe with, according to Expatica, one in five people out of work. On the other hand, unemployment is slowly decreasing and Spain remains one of the European Union’s fastest growing economies.

During 2015, the fastest growing sectors included areas such as business management and marketing, accounting and finance, agribusiness, engineering and IT, the creative sector, and renewable energy.

Top tips for Brits looking for work in Spain

In summary, there are many things to consider when thinking about relocating to work in Spain. There are many benefits such as on average a generous holiday allowance and a more positive work-life balance. However in terms of general salaries and job security, these generally don’t rate as highly when compared to the UK, although this does depend on the specific job and work package being offered. 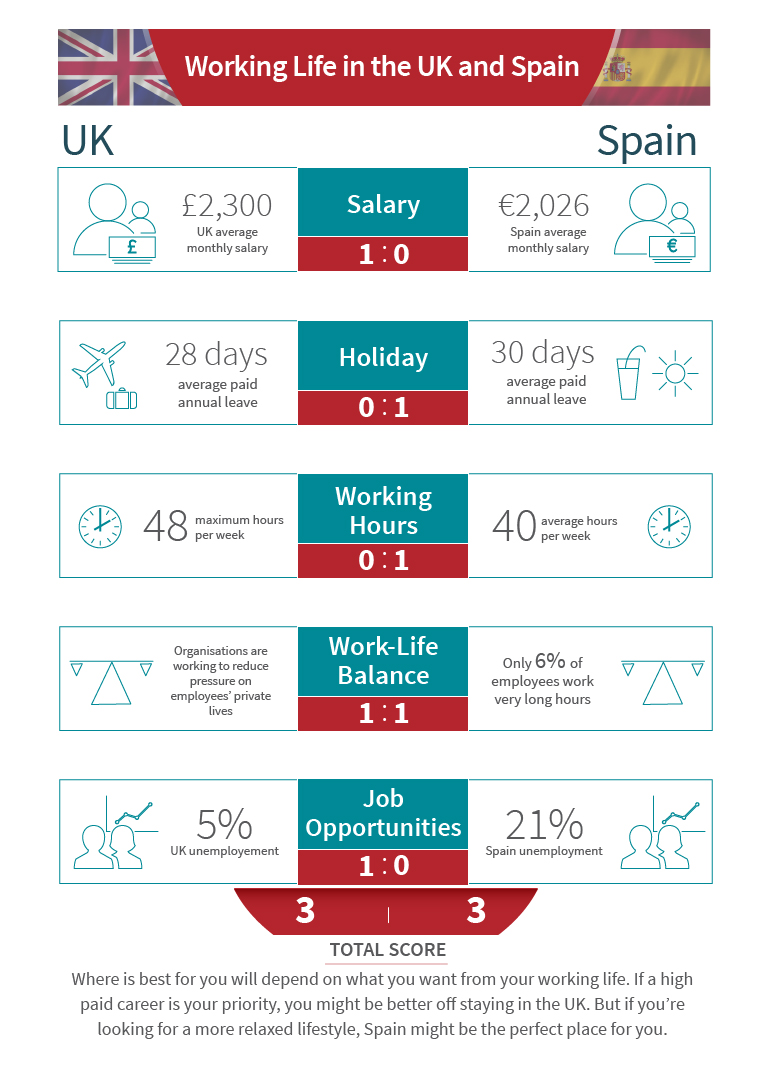 Whichever path you choose, ensure you are prepared with these top tips for working in Spain:

The above figures are based on the exchange rate, correct as of 11:11 on 01/04/2016, and are provided for indicative purposes only.