XE Market Analysis: USD Rallies then Falls Ahead of FOMC Meetings on Wednesday

Interest rate announcements are on the docket this week from the US, UK and Japan Fed meetings starting on Wednesday expected to focus on US-China trade and tariffs and setting the groundwork for lowering interest rates.

It's hard to believe it's already FOMC meeting time again, but currency investors are preparing for the latest news out of the Federal Reserve Bank. Fed Chairman Jerome Powell is expected to set the stage for an interest rate cut, as Trump tariffs and stock markets are dark clouds hanging over the US economy.

The Banks of Japan and England are expected to maintain the status quo and hold interest rates firm. Crude oil prices are expected to stay volatile as OPEC nations prepare to meet about continued production cuts. 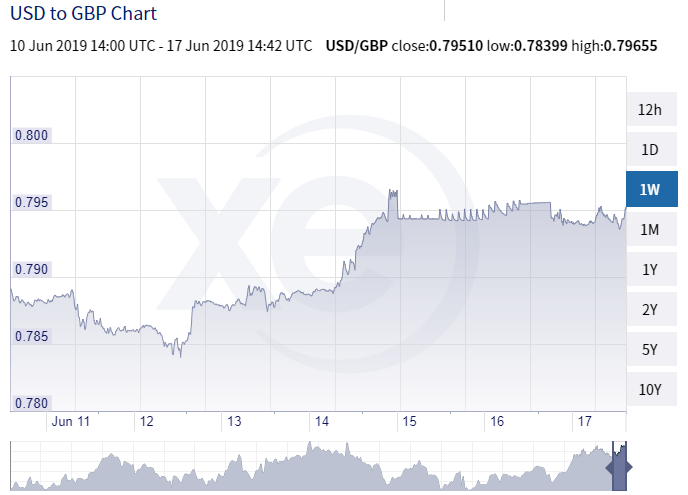 The stock market is making modest recoveries following a less-than-stellar week last week. Today's NY Fed Empire State Manufacturing Index dropped to its lowest level in three years to -8.6, missing the forecast 10 by a country mile. Stock markets seem to have taken that news in stride. The US dollar started on an upward climb but was weighed down by the Empire State Manufacturing Index announcement.

Brexit remains the guiding light for the fortunes of the British pound. As Boris Johnson seems to be the frontrunner to replace Theresa May as UK Prime Minister, pundits feel a hard Brexit is likely. Johnson tried to rally support today for his cause by asserting that the UK should have "full-fibre internet" available to everyone by 2025. The UK Department for Digital, Culture, Media, and Sport said last week the service would realistically be universally available by 2033.

The Euro is trading above 1.12 against the greenback today. Eurozone President Draghi will speak later about the economic health of the region, though the US Fed meetings are prominent on the minds of currency traders worldwide.

The USD CAD pair is looking for direction, as falling crude oil prices are being offset by a weakening American dollar. The pair is holding steady around the 1.3410 mark. Canadian retail and manufacturing sales data announcements are due out on Friday.

The Aussie dollar is hovering around recent lows near 0.6860 compared to its US counterpart. Meeting minutes from the Reserve Bank of Australia are expected out on its Tuesday business day. The US-China trade dispute continues to impede Australasian economies which rely on business from China. US tariffs impede China from buying raw materials from countries like Australia and New Zealand.

USD/JPY has barely budged today, in advance of announcements from the US Fed and Bank of Japan later this week. The pair made a slight climb to 108.68 but is otherwise rudderless in advance of meetings and interest rate decisions.