XE Market Analysis: No Love for US Retail or Stock Markets in Valentine's Day Trading

British PM Theresa May returns to parliament amidst heavy debate over the Brexit agreement on the table. The March 29th exit date is nigh.

British PM Theresa May returns to parliament amidst heavy debate over the Brexit agreement on the table. Some MPs are in hot water over whether a no-deal Brexit is on the table, and many are pushing for a vote on the deal February 27th, just a month before the scheduled Brexit date on March 29th. As the calendar dates flip closer to the cliff's edge, conservative MP Dominic Grieve (a Remain supporter) said the UK government is tied up in knots over Brexit and is  "We are tying ourselves up in knots and that's why we are paralysed," 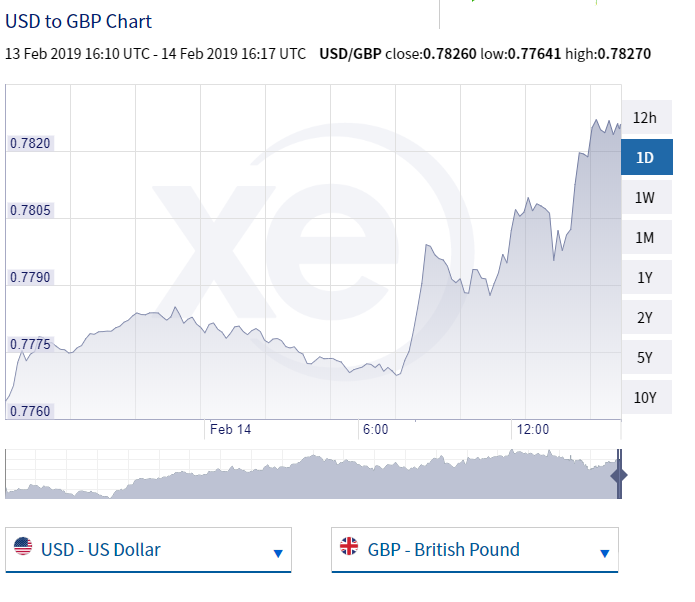 US retail sales in December hit lows not seen in 9 years, which made investors fall out of love with the stock market. Sentiment around Washington DC is that President Donald Trump will sign the latest government funding deal, offers less funding for "The Wall" than the agreement DJT rejected before Christmas in 2018. The President has proposed to hold off on further trade tariffs for 60 days past the original March 1st deadline.

Despite heated debate in the British parliament, optimism seems to remain that a deal will be reached before the March 29th Brexit date. GBP USD touched a 1.27762 low and now sits at 1.27833. Investors seem to be holding back on making a firm stance on sterling until a definitive Brexit scenario is established. GBP EUR closed at 1.13344.

The Euro is getting support from Germany's ability to avoid a recession despite poor weather conditions, weakness in the automotive manufacturing sector and the ongoing trade debates between the US and China.

The Canadian dollar is seeing negative influences from the third decrease in manufacturing in a row, sliding by 1.3%. The end of the week will bring announcements on Canadian foreign securities purchases, and the US will announce consumer sentiment data. The Bank of Canada seems to be poised to follow in the footsteps of the US Fed and other central banks by holding interest rates to the current levels. CAD has lost nearly one percent of its value in February relative to USD.

The Aussie is buoyed by the same sentiment about President Trump's willingness to delay imposing additional tariffs on Chinese imports. The AUD and NZD are seeing strength over the past couple of days. UBS economists predict Australian GDP growth will fall to 2.3% this year.

The NZD is on an upward climb in this risk on environment. The New Zealand bank seems to be weighing its options whether it will raise interest rates or lower them. USD NZD touched 1.47189 and now sits at 1.46460

If you need help navigating the world of international currencies, either to trade currencies to transfer them abroad for business use or personal obligations, check out XE Money Transfer. For up-to-the-minute currency exchange information for over 170 currencies, there is no better resource than the XE Currency Converter.

Happy Valentine's Day to you, and whomever your heart beats for.