Will the Latest Brexit Agreement Pass Scrutiny in UK Parliament?

British PM Boris Johnson and EU Commission President Jean-Claude Juncker said the latest Brexit agreement is a "fair outcome" according to the BBC.

UK PM Boris Johnson and EU leaders agreed to terms on a new Brexit deal. It's now up to British parliamentarians to approve the deal, though the DUP and Brexit parties are already rejecting the deal according to the BBC. The days for No-Brexit headlines seem to be numbered. The Sterling soared to a fresh five-month high on the good news. It now remains to be seen if the deal meets the expectations of a fractured Parliament. So, investors will tune in to the Theatre of House of Commons this Saturday. 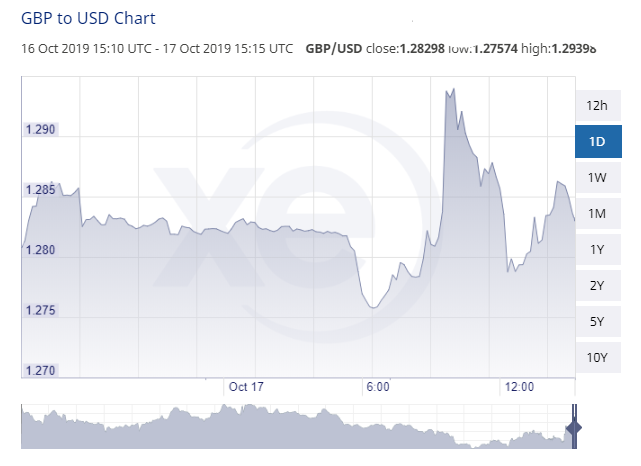 The greenback is trading with a softer tone against a basket of major currencies with the DXY Index down 0.2%. The Philly Fed manufacturing index was mixed, headline number declining 6 points to 5.6 for the month of October. US housing starts came below market estimates whilst unemployment claims recorded a slight increase. There is little in terms of hard economic data on the slate today, and hence, we expect the currency market to move into consolidation mode.

The British Pound climbed to a new five-month high after PM Johnson announced an apparent agreement over the divorce plan. The newly minted withdrawal plan has to jump over another major hurdle in a divided House of Commons this Saturday. So, it is simply a case of we are there but not quite there yet. GBP/USD meanwhile enjoys its stay close to key 1.30 mark and investors will keep close eyes on new developments surrounding Brexit as the 31 October date looms ever larger on the calendar.

Irish PM Leo Varadkar says the backstop has been replaced in the revised #BrexitDeal - adding it's a "unique solution, one that recognises the unique history and geography of Northern Ireland" and an agreement that "could become permanent"

EUR/USD broke above its recent consolidation zone to a seven-week high after EU and the UK announced they have reached an agreement of the separation plan. However, we expect today’s move to be short-lived as the core economic fundamentals have not changed: the eurozone is still facing the bleak prospect of a recession. Unless concrete fiscal measures are adopted, we expect rallies in the shared currencies to be temporary and open to whiplash reversals.

USD/CAD is trading 0.3% lower this morning following the releases of soft data south of the border. Meanwhile, Canadian manufacturing sales rose 0.8% after two consecutive months of declines. Sales were up in 11 of the 21 industries. CAD strengthened on the news and is expected to probe for a higher target around the 76 cent mark.

USD/JPY is trading directionless after recording a 2 ½ month high. Once again, the major is driven by speculation of an imminent trade arrangement between the US and China. However, contradicting reports from both sides of the bloc is injecting uncertainty and volatility. The pair moved higher after reports emerged that Chinese officials believe a phased agreement could be inked and trade tariffs could be removed earlier than expected. In the absence of key economic data, we expect the pair to trade along with the broad-based market sentiment.