The US Dollar is Chill After Turbulent Week

The greenback is trading flat across the board with a bias for safe-haven currencies USD/CAD takes a breather before a challenge on the 1.30 mark.

The British pound bounced from a seven-month low in the wake of selling pressure pushing the greenback lower. It was more of a story of US dollar weakness than one of Sterling's gains. The threat of a disorderly Brexit is still live. Politics, once again, alas, is expected to be the main driver of the GBP over coming months. Gains are expected to be capped and short-lived. 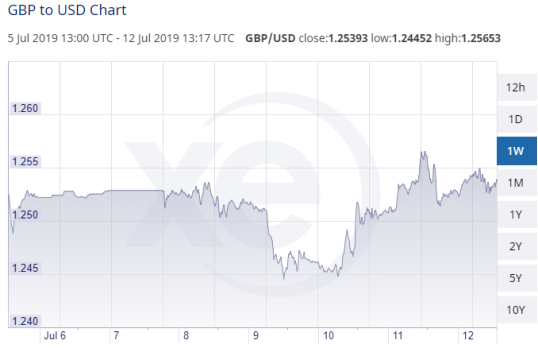 The greenback is set to close the week in negative territory after coming under selling pressure. Its losses were triggered by a dovish economic assessment by Powell, and testimony to the US House Finance Committee. The Tweeter in Chief in the White House may claim a small victory over the Fed, which seemed to be leaving the door open for a courtesy rate cut.

The economic calendar is light today: the Producer Price Index for final demand advanced 0.1% in June and is unlikely to encourage heavy directional bets in the currency market. We instead expect some position recalibration ahead of key data releases from Beijing. The National Bureau of Statistics is set to release Q2 GDP, retail sales and unemployment numbers over the weekend. A recent survey pointed out to a slowdown in the economy amid trade tensions and the data may come as a confirmation.

GBP/USD is stuck inside a tight trading range, after bouncing from the seven-month low. We expect further gains to be capped, however, over growing uncertainty about the future of UK-EU relations. The strong case for a disorderly Brexit is injecting nervousness into the market and keeping businesses on tenterhooks.

The Euro is trading within a narrow range around the mid-point of 1.12 as we enter the final session of the week. There was little to offer in terms of data. Headline industrial production in the euro bloc rose by 0.9% in May compared to the previous month. The market welcomed the turnaround, after a 0.4% decline in April. However, further details revealed the situation in Germany remains alarming. German production decreased at a record pace (down 4.3%) among the member states, increasing the odds of a recession.

The Canadian dollar is set to challenge the 1.30-mark post and is seen extending its gains versus the greenback today. Strong performance from the oil futures market one of the key drivers behind recent CAD strength. WTI is up 0.2% on the day, trading close to a two-month high.

AUD USD spent some time basking in the warmth over the 0.70 mark, but slipped back under to now sit back around 0.69920. Positive trade balance data from China elevated the Aussie.

USD/JPY is down 0.3% as the greenback struggles to add to gains above the mid-point of 108. Meanwhile, it was a terrible week for Japan in terms of incoming economic data. Industrial production was revised lower, adding to fears that the Japanese economy is slowly slipping into a recession. The Bank of Japan may start to explore the option of expanding its stimulus package in a bid to halt further decline and revive the economy.