Q1 GDP increased by 3.2% according to advanced estimates EUR/USD consolidating near recent lows WTI crude oil loses 1.70% to slide to $64.10 a barrel

The greenback continues to trade stronger versus most G10 currencies.  The Euro has been under pressure, losing near 1.4% this week. Weak economic fundamentals have been weighing heavily on the shared currency. The ECB also pointed to more headwinds in the medium-term with exports and manufacturing slowing down. EUR/USD is now entering a critical technical zone with an eye on the 1.11 level. 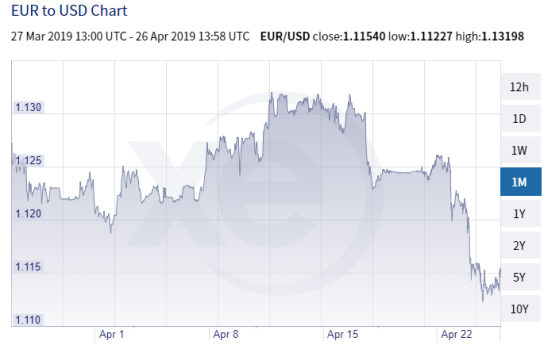 The much-awaited US GDP number is out and significantly beat market expectations. Real gross domestic product (advance estimate) rose by 3.2% for Q1 of 2019. The main drivers behind the increase include improving exports, higher investments and contributions from personal consumption expenditure.

GBP/USD climbed above the 1.29 handle but remains vulnerable to the ongoing Brexit impasse. Talks between the government and the opposition have so far failed to alleviate uncertainty, acting as a drag on consumer confidence and business. The pair is expected to hover around current levels in the absence of any further market-moving data.

The Dollar Index is expected to hold near recent high on the back of growth divergence. Across the Atlantic, the economies are, mildly put, stalling. Politics and soft fundamentals are expected to weigh heavily on the euro and the pound over the coming sessions. WTI oil is also on a slide for the third session in a row after surging to new 2019 highs.

GBP/USD climbed above the 1.29 handle today but remains vulnerable to the ongoing Brexit impasse. Talks between the government and the opposition have failed so far to alleviate uncertainty, acting as a drag on consumer confidence and business. The pair is expected to hover around current levels in the absence of any further market-moving data.

EUR/USD is trying to hold around the mid-point of 1.11 as the US dollar continues to dominate across the board. The story of economic divergence between the euro bloc and the US is behind recent moves. US Durable Goods Orders increased 2.7% mast March and this morning, the Bureau of Economic Analysis reported a higher than expected Q1 GDP. The upcoming election in Spain and a stalling German economy are expected to apply pressure on the Euro.

USD/CAD is trading sideways, with the key 1.35 psychological mark proving to be a hard level to crack. The focus today was on the GDP report card, which once again reaffirmed that the US economy is chugging on a faster track than most global economies. With oil trading lower today, we could see the pair attempting to make further advances towards 1.35.

In case you missed it, Australia’s CPI or inflation data came in at 0.0% q/q. The Reserve Bank of Australia closely watches this figure, and the market sold off significantly on the back of it. Although this was Australia-specific data, as is often the case, the NZD fell in sympathy.

On the other hand, the preliminary March Industrial Production was lower 0.9% month on month, reminding the market that the economy is still battling with economic slack.  The Bank of Japan left its accommodative monetary policy unchanged this week.

Create your XE account, request a quote on your preferred currency trade, and make a fast money transfer with ease.