The Canadian dollar continues to strengthen against a weakening US dollar. The loonie has appreciated nearly 3.5% year-to-date.

The Canadian dollar continues to strengthen against a weakening US dollar. The loonie has appreciated nearly 3.5% year-to-date, fuelled by stronger oil prices and the decreased fervor for the American dollar after recent dovish comments from the Fed.  Investors are pricing in rate cuts from the US central bank as prolonged trade tensions with China are starting to bite local businesses and near-term economic outlook. The market can re-assess the current situation with the GDP report, due for release end of this week. 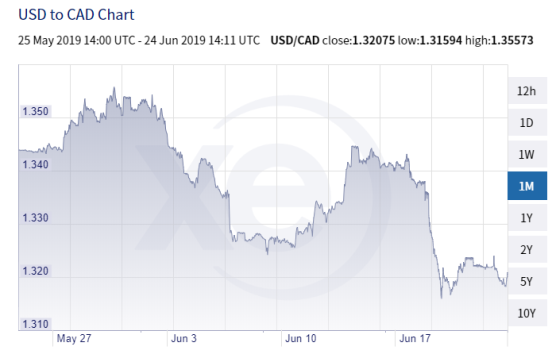 The US dollar limps into the final week of June, losing further ground against the major currencies. The DXY index is testing key technical support line near a four-month low.  Geopolitical risks, a dovish statement from the Fed and signs of a slowdown in US economic fundamentals are weighing on the greenback. This week, Fed Chair Powell’s speech (Tues), US GDP and G20 meetings to be the key drivers in the currency market. Gold has risen to its highest level in six years as tensions between the US and Iran dominate headlines. The calendar is relatively light today, so we expect safe-haven trades to be heavily favoured.

The pound is on course to close the month in positive territory after a three-month slide. GBP/USD has been riding the wave of general USD weakness, putting aside domestic political woes. The country still waits for its new PM: the two final candidates to the post are expected to stimulate headlines with more debates before July 2nd when the PM is announced. Meanwhile, Donald Tusk has reiterated the EU stance that the Withdrawal Agreement is not open for renegotiation. Failure to agree on a deal leaves the possibility of a hard exit on the current target date of October 31st.

EUR/USD is extending from last week’s rally, trading 0.20% higher this morning. The market seems to conveniently ignore soft ifo Business Index amidst general US dollar weakness. The ifo Business Climate Index (97.4) dropped to its lowest reading since 2014 down from 97.9 points in May. Investors’ hopes have been buoyed by a “marginal” improvement in the current business situation. The pair may run out of steam as it approaches the key 1.14 handle and in the absence of strong domestic data.

The Canadian dollar firmed against a broadly weakened greenback. As of this writing, the USD/CAD pair is consolidating in negative territory as market contemplates on the next move. The loonie is expected to mirror moves in the oil futures market where crude oil has recorded a fresh three-week high. OPEC members are expected to keep production cut agreement in place this week. Canadian GDP report card is due this Friday. Investors will also take a cue from the latest Bank of Canada Business Outlook is due for release end of this week.

AUD USD is holding on to last week's gains and is hovering around 0.695 as it waits for some sort of news catalyst. Whether it will breach the 0.70 mark or sink into the 0.68 is purely speculation at this point.

Dollar-yen dropped to its lowest level since January as the market continues to favour safe-haven assets and currencies. Trade tensions with China and the escalating war of words with Iran are keeping investors on their toes. With the 10-year Treasury bond yield trading with negative sentiment, we expect USD/JPY to consolidate with a bearish tilt.

(Note: Though you've been reading this article on the XE Blog, it originated from the XE Community forum. We hope you enjoyed it, and please return to our blog often, of you can find these insights on the