The greenback remains subdued as the market waits for US-China trade talks. GBP/USD trades with a slightly negative tone ahead of new Brexit developments

The Australian dollar jumped higher and is now trading 0.2% higher against the US dollar after the Reserve Bank of Australia decided to leave the cash rate unchanged at 1.50%. The market was surprised by the move and was instead expecting a rate cut of 25 basis points.  The Central bank believes that the economy will grow by 2 ¾% this year, backed by higher investment and “some pick-up” in household disposable income. The Australian labour market has been stable recently, but given the presence of some slack, the RBA will be monitoring the incoming jobs data when deciding the next move. 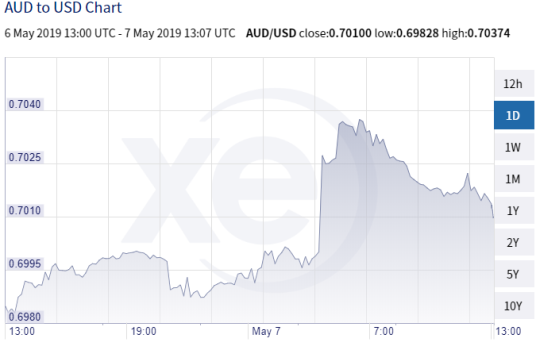 The currency market stayed inside tight ranges in overnight session ignoring threats of new trade taxes and growing uncertainty over the direction of US-China trade talks.  The dollar index is in positive territory (+0.15%), supported by strong local economic fundamentals. Investors should avoid big directional bets ahead of crucial US inflation numbers due for release towards the end of this week. Oil prices, on the other hand, continue to trade lower after soaring nearly 36% this year. The US-Sino negotiations are expected to be the focus of attention, and in the absence of top tier data, the market is vulnerable to tweets and noises from @RealDonaldTrump and @POTUS.

The Pound waits patiently for positive development around Brexit. So far, cross-party negotiations have yielded very little progress, and the market has been feeding off noises and scraps. GBP/USD stays around the 1.31 post but could turn volatile as investors could see a series of more votes in coming weeks. The EU election is around the corner and uncertainty over Brexit will once again start to bite off the currency.

The Euro is extending its consolidation theme around the 1.12 handle. The economic calendar remains very light, but the EUR/USD could be affected the new trade tensions between China and the US.

Earlier today, data from Destatis revealed that the German price-adjusted new orders in the manufacturing sector rose 0.6% in March. This was led mainly by a 4.2% increase in foreign orders. There are signs that the German economy is starting to make a painfully slow comeback. The market will keep an eye on the new EU Economic forecasts due for release tomorrow.

The USD/CAD is trading with a positive bias but any further progress remains capped near the key 1.35 level. BoC Governor Poloz failed to inspire trading activity when speaking about the Canadian mortgage market. High levels of household debt is a major headache for the central bank and which could prevent in further tightening. The pair is expected to trade around recent familiar ranges.

The Australian dollar jumped higher and is now trading 0.2% higher against the US dollar after the Reserve Bank of Australia decided to leave the cash rate unchanged at 1.50%.

The Nikkei Japan manufacturing PMI rose to a three-month high with both new orders and output declining less than expected. The Index crawled to 50.2 amidst signs of business confidence returning. But the sentiment remains very fragile with the ongoing global trade tensions. The yen is expected to be firmer, continuing to attract safe haven flows.