Investors are avoiding heavy currency bets as they assess the wider implication of the latest round of trade tariffs exchanged between the US and China.

The USD/CAD pair maintain a consolidation trend, trading between the 1.34 and 1.35 range in the spot market. The Canadian loonie failed to strengthen further on the back of strong job number of last Friday. Investors are avoiding heavy currency bets as they assess the wider implication of the latest round of trade tariffs exchanged between the US and China. 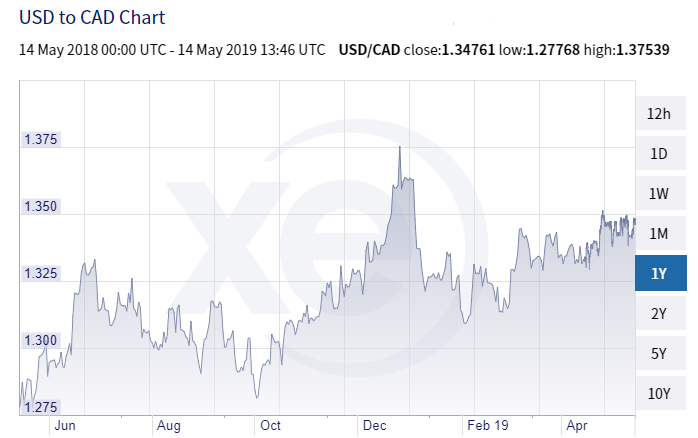 The greenback is making a timid recovery after touching a four-week low this morning. Trade tensions went a notch higher after China retaliated against new US taxes with its own levies on US imports. Last Friday, the US Administration increased tariffs from 10% to 25% on about $200 billion worth of Chinese imports.

There is still hope that the officials from both sides will get the negotiations back on track, after taking this little detour. The economic calendar is thin today, and we expect rhetoric around international trade relations to remain at the centre of attention. The currency market is expected to maintain a cautious tone ahead of releases of bellwether Chinese data later today on investments, retail sales and unemployment.

Pound sterling remains under pressure with Brexit talks going nowhere. Lack of progress is acting as a drag on future investment decisions. Meanwhile, investors welcomed surprisingly better than expected job numbers. The unemployment rate in the UK dropped to 3.8%, its lowest level since 1974. Average weekly earnings were estimated to have increased by 3.3% or 1.5%, after adjusting for inflation, compared to 12 months ago. The market is hoping for a breakthrough in Brexit negotiations to push the GBP/USD pair out of current ranges.

EUR/USD turned bearish, down 0.2% following the release of ZEW index. The latest Indicator of Economic Sentiment in Germany dropped to minus 2.1 points. The escalation in the trade dispute between the US and China adds to the growing uncertainty over German exports – a key component of growth for the country and region. The pace of economic advancement is expected to be adversely affected over the coming six months. The euro is expected to trade cautiously around current levels.

USD/CAD travels back to the upper end of recent trading ranges with the loonie failing to add to momentum following Friday’s stellar Canadian job numbers. The pair bounced back from the 1 ½ week lows with investors cautious over ongoing US-China trade spat. They will also keep an eye on the inflation number due for release this Wednesday.

Australia's and New Zealand's respective currencies continue to slip under the weight of US-China trade talks. The AUD touched a low of 0.69372, and the NZD reached 0.65654.

USD/JPY is up by 0.3%, with the pair bouncing off a three-month low. Investors believe that with trade tariffs now settling down, the trade talks can resume their normal course.  Officials still believe a trade deal is possible before by June. Meanwhile, lower Japanese Economic Watchers sentiment is adding to bearish Yen bias. PPI data is next on investors’ radar.

Sign Up and GET a Trade Quote In Minutes

Note: This article was first published on the XE Market Analysis Community website.