US employment rose by 75,000 in May, well below market consensus of 175k along with downward revisions for the previous two months.

USD/CAD moved lower after the greenback came under selling pressure following a poor job report. The pair crashed below recent consolidation zone of 1.34-1.35. With firmer pricing in the oil futures market, the commodity-linked loonie is now expected to try to establish a new level. So far this month, it has strengthened nearly 1.8% as USD bears are starting to have an upper hand (or upper paw if you will.) 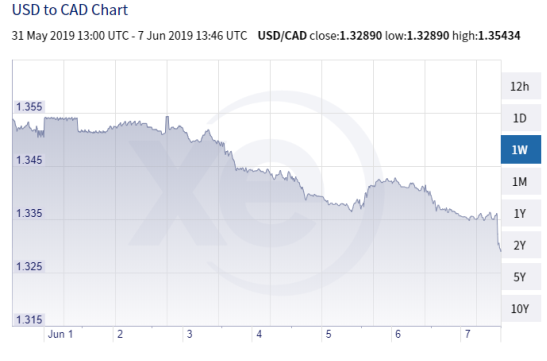 The greenback is plunging against other G-10 currencies following the release of a disappointing job report this morning. Payroll employment rose by 75,000 in May, well below market consensus of 175k along with downward revisions for the previous two months. The unemployment rate meanwhile steadied at 3.6% according to the US Bureau of Labour Statistics.

This latest figure could be the first signal of a slowdown in the economy. The Dollar Index has dropped to its lowest level in ten weeks as the market continues to assess the wider implications of this report. Bets for an imminent rate cut will undoubtedly increase. Market sentiment also remains very fragile amidst ongoing trade kerfuffle between the US and several major trading partners.

GBP/USD is on course to close the week in the green ahead of political headaches in the coming days. The pound is trading 0.35% higher, led mainly by disappointing US job numbers. UK politics will once again come to the fore with the race for the leader of Conservative Party now open. The pair is expected to move into the cautious mode with short to medium term bearish sentiment still hanging on.

The wait is over and the Euro got a boost with a lower than expected US job numbers. The market seems to ignore domestic soft data with the shared currency rallying against broad-based dollar weakness. ECB pushed back any plans to shift from its current monetary policy until at least mid-2020. German industrial production was meanwhile lower by 1.9% in April but failed to stop Euro bull to charge to its highest level in three months.

USD/CAD tumbled to its lowest level in three months after diverging employment numbers. The US added fewer jobs than market estimates whilst the employment held steady for the Canadian economy. The unemployment rate dropped to 5.4% in May and reached the lowest level in 43 years.  With crude oil also trading firmer, the CAD strengthened by 0.4% and is now expected to consolidate around current levels.

The Aussie dollar is just over the 0.70 mark compared its US counterpart. You guessed it, the US jobs report weighed down USD, and the AUD rose on comparative tranquillity.

The US dollar dipped to its lowest level since January against the Japanese Yen. Sentiment turned negative after US non-farm payrolls surprised the market to the downside. There now growing concerns that trade wars are starting to harm the domestic economy and could push the Fed to cut rates to support the economy. Safe-haven flows are expected to keep the US dollar under pressure.