The US Dollar Bears the Brunt of Impatient Currency Markets

The US Dollar is bearish this morning, as currency investors turn to the Aussie, Loonie and safe-haven yen, disappointed in the Fed's interest rate hold.

The Japanese Yen soared to a five-month high against the greenback, while the market shows disappointment of recent Fed announcement. The Fed seems to be adopting a Wait-and-See policy before making necessary adjustments to its monetary policy. The Bank of Japan decided to leave its policy unchanged. and it sees risks to global growth increasing. Investors prefer to move their funds into safe-haven assets. The Yen has appreciated nearly 4.5% over the last two month as a result of escalating trade tensions and geopolitical risks 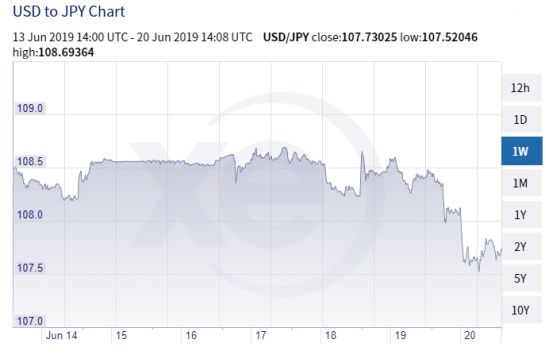 The US dollar continues to be under heavy selling pressure after the FOMC left its fed fund rates unchanged nearly 24 hours ago. Further dismal economic readings this morning added fuel to the negative sentiment. Market participants were left unimpressed by Fed Chair Powell’s delivery of a measured press conference.

The Committee remains data-dependent (sort of still patient) and signalled that they will prefer to look at the trend or any inflection therein rather than a single economic data point before making the next move. This morning, the Philly Fed Business Outlook Survey weakened with growing uncertainties over the medium term. The index declined from 16.6 in May to 0.3 for this month. The USD Dollar Index is currently at its lowest level in a week as the market continues to assess the wider implications of the recent announcement.

The Pound is trading higher by 0.25% this morning in reaction to the dovish hold by the Fed and riding the wave of USD sell-off. The Monetary Policy Committee, meanwhile, voted unanimously to keep the Bank Rate at 0.75% this morning. In a near "copy and paste" move, the Bank of England also sees downside risks increasing. The members pointed out that a no-deal Brexit scenario may still be in the cards and future adjustments from the central bank will rely heavily on how the economy reacts to the “nature and timing" of an EU withdrawal by the UK.

The Euro is giving away some of the gains, unable to power further the 1.13 handle against the USD. The market is now pricing in an imminent rate cut from the Fed as the recent data showed business investment has been soft and “uncertainties have increased”.  This is more of a story of dollar weakness than Euro strength. The Eurozone is facing its own domestic headwinds.

USD/CAD gapped lower to a three-month low following dovish hold from the US Fed and increasing crude oil prices. Geopolitical tensions in the Middle East triggered an upside move in the WTI, up 4.5% as of this writing. With the greenback under global sell-off pressure, we expect the loonie to trade with a firm tone.

AUD USD climbed above 0.692 this morning, gaining some swagger in the markets after wallowing in the mid-0.68s. The Chinese Commerce Ministry confirmed that the US and China are returning to the negotiating table, and currency watchers are hopeful the trade tensions will ease along with US monetary policy.

Dollar-yen breaks the recent consolidation zone on the downside, now trading at its lowest level in five months. The sentiment is turning increasingly bearish on the dollar with the 10-year Treasury bond yield dropping below 2% for the first time in two years.

The Bank of Japan also voted to keep its monetary policy unchanged a few hours after the Fed’s announcement. There are growing concerns about the effects of a prolonged trade war between the US and China. Exports and production, both key components of GDP growth, have been affected by the slowdown in overseas economies.