The Pound Enters March Like a Lion Which Fears No Brexit

The Sterling closed February 1.41% higher and in a favorable range for the second month in a row.

The Canadian dollar came under heavy selling pressure after a weaker-than-expected GDP. The country's productivity hardly grew, recording its worst quarterly performance in two and a half years. Consumer spending was low, investment plunged, and housing markets fell the most in a decade. With Canada's neighbour to the south churning strong economic data, we expect the USD/CAD to move higher as the market continues to analyse incoming data. 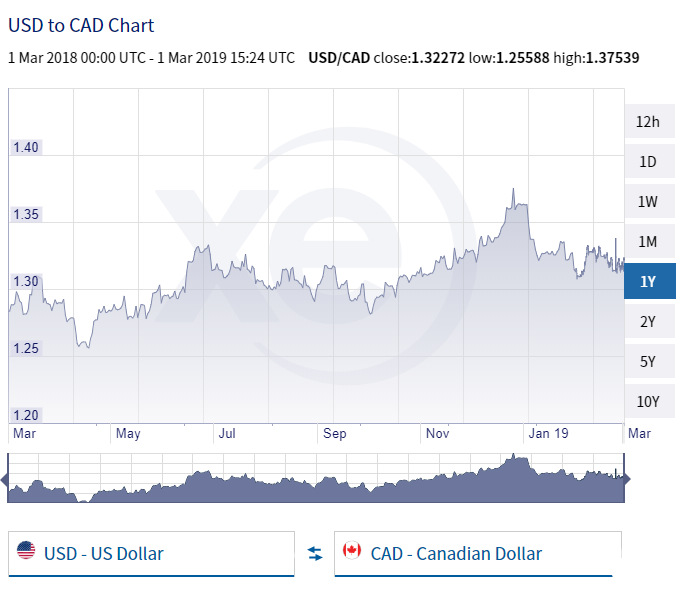 The greenback starts the first trading day of March with a steady footing against the major currencies. Core PCE, the Federal Reserve’s preferred gauge for inflation, matched the market’s expectations this morning.

The report, however, includes estimates for December 2018 and January 2019 due to the recent partial government shutdown. Market participants now turn their attention ISM Manufacturing PMI to take the pulse of the economy. Equity markets are trading higher with investors growing better risk appetite. Last night, Powell reiterated that the FOMC would be patient on future adjustments amidst “crosscurrents and conflicting signals”.

Caixin China General Manufacturing PMI picked up last month, easing fears of an economic downturn. The Canadian loonie is under pressure this morning after Stats Canada signaled that the GDP slowed 0.1% in Q4.

The Sterling closed February 1.41% higher and in a favourable range for the second month in a row. Investors are hoping for a Brexit deadlock with the House of Commons, which is due to hold a second meaningful vote on March 12th. However, the IHS Markit/CIPS Purchasing Managers’ Index fell to a 4-month low last month, staying at its second-lowest level since July 2016 – the month following the EU referendum. Manufacturers continue to plan for potential Brexit-related disruptions

The Euro is trading flat against the greenback this morning, as investors look for clear directions. EUR/USD closed the month of February 0.75% lower following soft data from the Eurozone.

Meanwhile, the US dollar continues to attract bids, receiving a boost from yesterday’s strong GDP numbers. The US economy is in a better shape compared to the euro bloc where Germany recently missed sliding into a technical recession. The Eurozone Manufacturing PMI dropped below key 50.0 readings in February, for the first time since June 2013. Germany and Italy recorded the lowest scores in the region, adding to growing concerns that the ECB may keep hold or even extend its current monetary policy.

USD/CAD jumped 0.75% after data showed GDP growth slowed to 0.1% in the fourth quarter. The drop was due to a 2.7% decline in investment expenditure and lower exports. The latest incoming data releases raise concerns on several fronts. The housing market also recorded declines with investment falling 3.9%. We expect the Canadian loonie to remain under pressure. along with the WTI, which is down by 0.25%.

AUD/USD is trying to recover after sliding by nearly 1% yesterday. Better-than-expected Caixin China Manufacturing PMI helped the AUD to bounce above the 0.71 handle. Investors will be closely watching for China’s trade numbers next week along with the central bank’s decision. The RBA is expected to keep rates unchanged

We expect the US dollar to fetch more Yen as the Nikkei Japan Manufacturing PMI pointed to a first contraction in the Japanese manufacturing economy since August 2016 during February. The gauge fell to 48.9, from 50.3 in January, which is the lowest mark it has hit in 32 months.