The greenback makes a strong entry into October with the US Dollar Index up by 0.15%. Most major currencies are reeling under the pressure of political uncertainty.

The greenback makes a strong entry into October with the US Dollar Index up by 0.15%. Most major currencies are reeling under the pressure of low global growth and political uncertainty. The market now waits for a slew of NA economic data which will set the tone in the currency market. Investors will direct their attention towards the US September manufacturing PMI and ISM statistics. 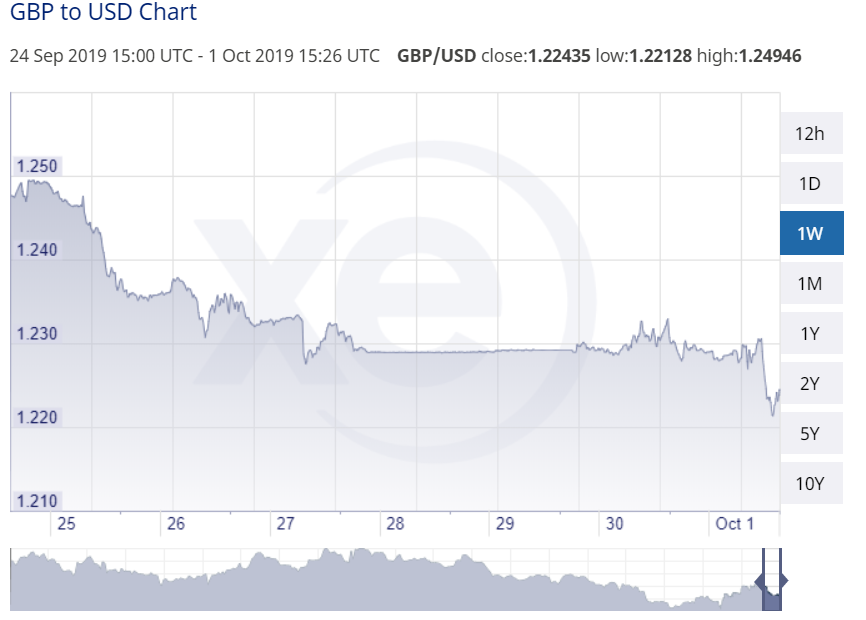 US ISM Manufacturing PMI fell to 47.8 points, worse than expectations and the lowest since 2009. It will be interesting to see how currency markets react to this news.

Brexit continues to dominate the headlines and drive market sentiment for the British Pound. With 30 days to go, there is less clarity on the modus operandi of leaving the EU. The UK government is reportedly preparing an alternative Withdrawal Plan that has to pass two hurdles: acceptance from the EU and approval from a divided House of Commons. The Prime Minister has meanwhile ruled out any option of extension, reiterating “we will come out of the EU on 31st October”. GBP/USD oscillates around 1.23 with a tilt to more downside risks.

EUR/USD dipped its toes to a two-year low-amid weak survey data. The Markit Eurozone Manufacturing PMI came in at 45.7, plunged to its lowest readings since October 2012. The situation is deteriorating with key components of output, new orders and purchases all falling sharply last month. This is the eighth month in a row that the PMI has posted below the 50.0 no-change mark. Germany is leading the regional countries with its PMI falling to a 10-year low adding to a grim outlook for Q4. The euro is expected to remain under pressure with no swift short-term bounce on the cards.

The USD/CAD pair is moving towards the upper end of the 1.32 – 1.33 range after Canadian gross domestic product missed market estimates. After four months of growth, real GDP was flat in July with goods-manufacturing industries declining 0.7%. Durable manufacturing was down for the third time in four months. This may push the Bank of Canada to re-evaluate its next policy move given global economic slowdown.

Earlier today, the Reserve Bank of Australia slashed its benchmark rate by 25 basis points, keeping the option for more rate cuts open. The AUD declined sub-67 cents US as a result and is now probing a two-month low.

The US dollar strengthened against the Japanese Yen with the pair moving to test last month high near 108.50. The move comes on the back of soft Japan's Tankan Survey which revealed large manufacturers confidence dipping to a six-year low. They are also reducing capital expenditure plans given growing global uncertainty. We expect the USD/JPY to test the technical area of a 200-day moving average.