The Markets Are Calm Before Leaping Into a Monstrous October

Brexit uncertainty continues and is darkening investor sentiment. The euro is running to stand still and US and China continue to argue about trade tariffs.

We enter the final day of the month and Q3 with the US dollar trading broadly higher against other G-10 currencies. Falling valuation of spot gold (-0.6%) and WTI crude oil prices (-1.2%) are also adding downward pressures on commodity-linked currencies. The Caixin China Manufacturing PMI improved modestly in September (from 50.4 to 51.4) but details showed total new exports business declining further.

The ongoing trade dispute with the US continues to dampen overseas sales, increasing production costs and damaging business confidence. So, we should see new developments in trade negotiations to remain influential in currency moves. Today, month and quarter-end flows are likely to drive the market. 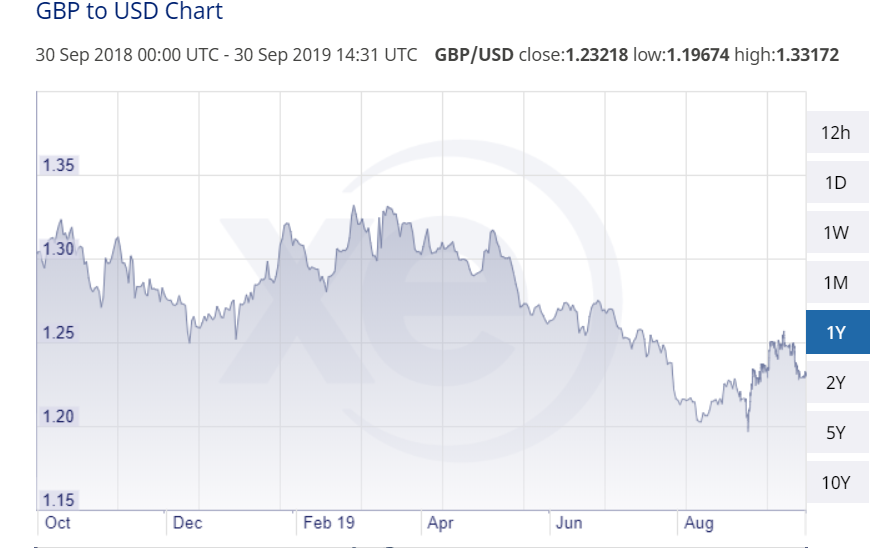 The POTUS and other factors continue to put pressure on the US Federal Reserve Bank to cut rates again in Q4. Cutting rates, when combined with ongoing trade tensions with China will lead to higher prices for consumers and businesses. If fuel prices go up on top of higher prices, it could lead to a monstrous stagflation situation. The last time the US economy wrestled with stagflation was about 40 years, ago, and it caused economic hardship for many Americans.

The final UK GDP reading was unrevised from the previous estimate, confirming a contraction of 0.2% in Q2. The incoming data remains volatile. The services sector has slowed down to its weakest rate in three years, lowering performance from the manufacturing sector. Investment has stalled as the business community waits for more clarity around Brexit. We expect more turbulent days ahead for the cable as we approach the exit date of October 31st. We expect the GBP/USD to close the month in a state of Doji – technical indecision.

The Euro is trading flat but with a negative bias against the greenback. EUR/USD is set to close in the red for the third successive month. Growth outlook within the region remains sombre, the German economic engine of growth has weakened and attempt by the European Central Bank to stimulate the eurozone economy is proving to be futile. There is little in terms of EU data to move the market and indicators are flashing signals that the pair could test sub-1.09 levels.

The USD/CAD pair is in directionless trading, confined to tight range around the 1.3240 mark. It is the start of a busy week but there is little on the slate today to sway investors sentiment. Crude oil futures prices are sliding lower this morning, marking a major reversal from the five-month peak it reached earlier this month. A barrel of oil is now challenging the lows of $55. We expect the currency pair not to stray far away from current levels ahead of Canadian GDP report due for release tomorrow.

The antipodean currencies are the major losers this morning. The Aussie is testing a four-week low (ahead of an expected rate cut by the Reserve Bank of Australia) whilst the Kiwi is down 0.45%, falling on weak business confidence.

Dollar-yen is trading inside Friday’s range, driven by broad-based market sentiment. The JPY failed to keep momentum after strengthening during earlier hours.

Details from the BoJ summary revealed that the central bankers were discussing the option of increasing stimulus for the economy. Overseas headwinds remain a concern for Japan with inflation running low, industrial production contracting 1.2% and housing starts plunging 7% year to date.

The pair is now trading a touch around the 108 handle as market shifts focus to US Chicago Purchasing Managers' Index and Dallas Fed Manufacturing Business Index for further trading impetus.