The Greenback Starts February on a Negative Tone (NA/EU Update)

The Canadian dollar maintains a bullish grip against the greenback as we moved into the first trading day of February. The CAD strengthened by nearly 3.5% in January, mirroring strong   upwards movement in oil futures. We expect the pair to consolidate at current levels as the market assesses today’s job numbers from the US. We'll keep an eye on key meetings between China and the US over trade talks. 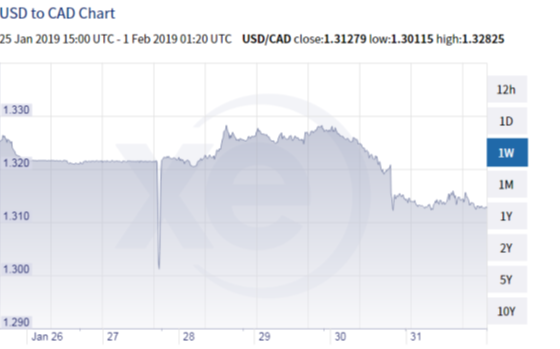 The US dollar starts the first day of the month under pressure with the DXY Index down 0.1%. The jobs report was mixed, with the economy adding 304k jobs (above market estimates) but there were downward revisions to previous numbers. The unemployment rate also ticked up from 3.9% to 4.0%. We expect the market to trade with caution on these numbers. Meanwhile, NYMEX oil continues to march higher, up 1.20% on the day and lending support to commodity currencies.

The British Pound is in negative territory following the release of poor manufacturing data. The UK manufacturing PMI fell to a three-month low of 52.8, down from 54.2 in December as a result of Brexit uncertainty and signs of global slowdown. The PM is expected to negotiate a new deal with the EU which is likely to generate more volatility for the GBP/USD pair.

The Euro is a star performer among the G-10 currencies this morning, up 0.25% against the greenback. Dovish comments from the Fed and downward revisions of the US jobs data are weighing   negatively on the US dollar. Meanwhile, the Euro area annual inflation is   expected to be around 1.4% in January according to a flash estimate from   Eurostat. We expect the EUR/USD pair to trade along general market sentiment.

The greenback fell to session low against the Canadian loonie in the aftermath of jobs data. The USD/CAD pair is toying   with the lower levels of 1.31, a key 200-day moving average. Strong oil performance (near a 9-week high) is the primary driver behind recent CAD strength.

AUD/USD is trading with a negative bias after the report showed the Chinese manufacturing came below market estimates. PMI was at 48.3 versus the 49.6 forecast, its lowest level since Feb 2016. The pair is now trading 0.3% lower, and we expect it to trade with a bearish tone going over the weekend.

Dollar-yen moved to its highest level in three days, despite the release of mixed employment numbers from the US. ISM Manufacturing PMI beat market estimates at 56.6 and attracting more bids. We expect the pair to hit a steady patch around current levels ahead of key meetings between US and Chinese officials over trade talks.

Want to receive foreign currency exchange, and the factors that influence valuation on a daily basis, right to your email inbox? Sign up for the XE Currency Market Analysis at: