The GBP Doesn't Suffer from Paraskevidekatriaphobia

US Retail results were better-than-forecast, and the British pound is faring better than you'd expect based on recent Brexit tensions.

Sterling is showing no sign of paraskevidekatriaphobia (the fear of Friday the 13th) jumping to a two-month high against the greenback. Market participants continue to bet heavily, and perhaps dangerously, on an outcome of the UK exiting the EU with a makeshift agreement (after another extension) rather than a no-deal Brexit. 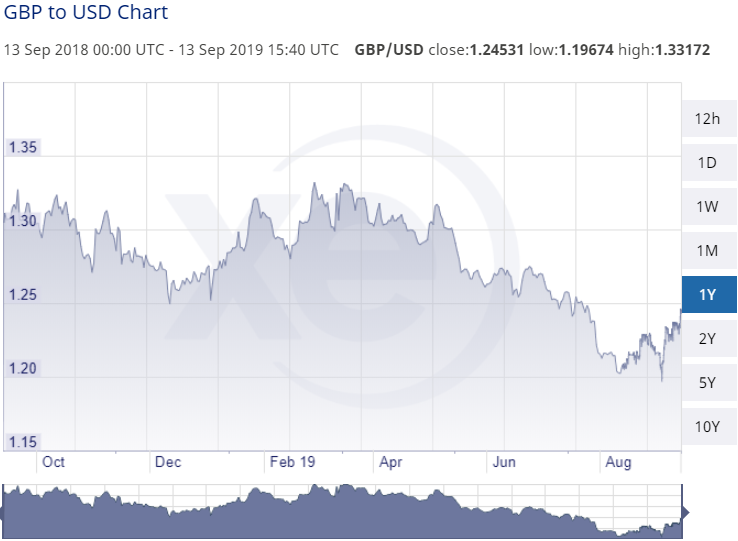 The Dollar Index, down 0.25%, looks to be heading for its second successive weekly decline. U.S. retail sales rose 0.4% in August following July’s of 0.8%, according to the latest data from the U.S. Commerce Department, released Friday; the data was better than as economists were expecting to see an increase of 0.2%. Crude oil prices have steadied in the futures market after slumping nearly 4% yesterday. We should expect some relief for under-pressure commodity-linked currencies. Gold has moved above $1,500 an ounce, up 0.6% this morning. The market is likely to move into cautious mode ahead of the scheduled mid-week FOMC meeting.

Sterling rose above the 1.2450 barrier, a two-month high, carried by renewed optimism that a no-deal Brexit can be avoided altogether. A new extension of exit date is on the cards. And so is a fresh general election in the UK. Whilst the recent rally has been purely based on speculation, we remain cautious around the fundamental developments surrounding Brexit and expect the 1.25 to hold unless a real breakthrough is achieved when the PM meets with EU officials.

The ECB came, it saw, but it failed to deliver the right stimulus package to meet the market’s expectations. The Euro saw an initial drop to nearly a 15-month low before staging a strong rally to the 1.11 mark. The central bank announced it would restart a timid €20 billion asset purchase program as of 1 November and has cut the deposit rate by 10 bp to minus 50 bp. Yet, the latest action from the Governing Council once again proves that monetary policies alone cannot kickstart a sustainable economic growth. Yet as you know, it takes two to tango. The market will now be looking for fiscal measures from members nations, especially from Germany to revive its flagging economy.

USD/CAD is trading within a tight 30 pips range in a directionless market. With no local data on the slate, the loonie is been driven mostly by exogenous factors. The ongoing election campaign is unlikely to have any major impact on the currency pair. The country goes to the polls on October 21st. The loonie is benefiting from a steady performance in crude oil this morning. WTI is currently trading around $55.00 a barrel, after declining $2 yesterday. OPEC+ may be called to revisit its output production cut to re-balance the market.

The Australian dollar made modest gains this week on the USD and is hovering around 0.68990.

The greenback regains the 108 post versus the Japanese Yen amidst improving market sentiment. It seems there is a real effort, for now, between officials from the US and Chinese camp to concoct a trade agreement.

The market will keep an eye on a torrent of Chinese data to be released over the weekend to assess the latest health of the economy. A below-par performance could trigger more urgency to halt further deterioration in trade relations. USD/JPY will continue to monitor fresh developments in global risk sentiment before taking the next leg.