The greenback is keeping a positive tone, trading broadly higher against its major peers this morning.  Market watchers are eagerly waiting for the FOMC announcement – a likely 25 bp rate cut is on the cards. The global economic landscape has not changed a lot since last July when the Fed announced its first insurance cut. Trade tension continues to weigh on global economies and inflation remains muted. The usual focus will be on the Summary of Economic Projections and press conference. 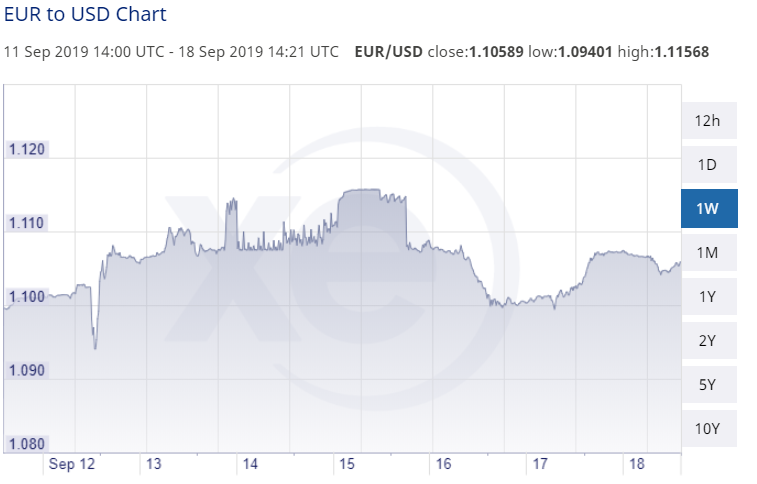 The greenback has a positive tone, trading broadly higher against its major peers this morning. President Trump is looking for a big cut in the interest rate, though Fed Chair Powell is expected to deliver a conservative quarter of a percent rate cut.

Crude oil is steady but remains above recent upside gap. Gold is extending its gains for the third straight session ahead of the conclusion of the Fed two-day meeting.

Sterling is in negative zone as the NA session opens, unable to sustain yesterday’s rise above key 1.25 mark. PM Johnson insists that the UK will be leaving the EU by Oct 31st and with opposition gathering steam, it is unlikely the exit will be without a deal. Investors’ sentiment and the GBP/USD will continue to be driven by development surrounding Brexit and today’s major event risk.

EUR/USD is giving away gains this morning after surging towards the 1.11 handle yesterday. Inflation data released earlier today came in line with expectations and failed to inject any trading impetus. The market is now turning cautious and sentiment, as expected, will be driven by Fed interest rate decision and outlook.

USD/CAD remains within the consolidation zone of 1.32 – 1.33 in directionless trading. The market could see an attempt to break through with the release of Canadian inflation numbers. WTI is retracing after touching its highest level since May 30th after Saudi Arabia said full oil production would be restored by end of this month.

Antipodean currencies are trading lower – the Aussie is down 0.4% on weak economic data and Kiwi is trading near a two-week low on similar concerns. The Aussie closed at 0.68423 and the NZD is at 0.63345.

The greenback is holding firmer against the Japanese Yen with USD/JPY trading near a 1 ½ month high. The pair is likely to see major moves after the Fed’s announcement where a cut is expected. The market will also keep an eye on the Bank of Japan’s monetary policy meeting. With market sentiment turning to risk-on, we expect the Yen to trade with a downside bias.