The ECB Rolled a Six-Sided Die Hoping for a Seven

The European Central Bank and US inflation took centre stage in the financial market today. The Governing Council of the ECB delivered a three-pronged attack:

The Euro, however, plunged 0.4% on the news as these monetary measures may prove to be not enough of a monetary loosening to prop an ailing Eurozone.  The currency market remains volatile as participants continue to digest the incoming news. Oil is trading lower 1.50% this morning, as a result of lower demand and a return to a supply glut. Commodity-linked currencies are expected to trade with a downside bias. 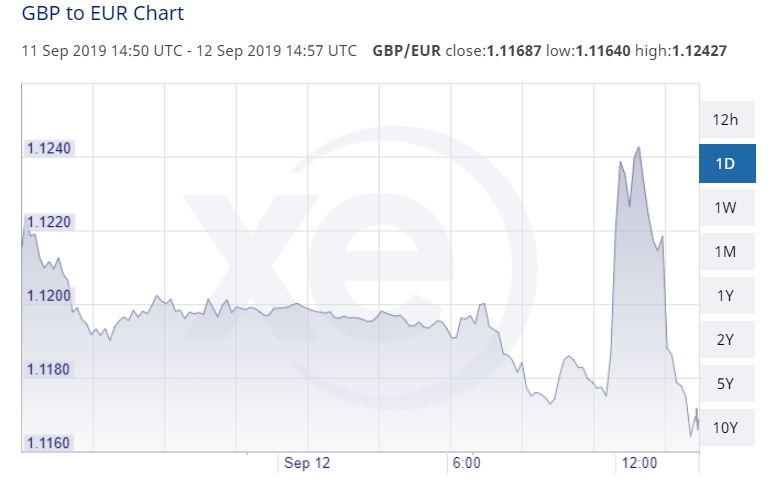 On the other hand, core CPI in the US rose 0.3% in August, beating market estimates. The index now stands at 2.4% over the past 12 months (the largest increase since July 2018), quashing any hope of a further rate cut from the US Fed next week. The market remains volatile as participants continue to digest the incoming news.

President Trump delayed new tariffs on Chinese products, providing hope that there is progress in the US-China trade negotiations.

GBP/USD dips below key 1.2300s amidst broad-based US dollar strength. The details of Operation Yellowhammer failed to cause lasting concerns to the pound. The market believes the worst-case scenario could be avoided altogether. With less than 50 days to go until (the scheduled) Brexit day of October 31st, all the options are still alive, and a prolonged consolidation of GBP/USD could eventually lead to heightened volatility and breakout.

EUR/USD jumped to 1.1070s on a kneejerk reaction following the ECB’s decision to cut rates. However, there is now a general sense of disappointment as the details of the decision starts to seep into the market.  The ECB is leaving the door open for further loosening to meet its mandated objective begins on the bond purchases in November but the introduction of a two-tier system for reserve remuneration, exempting some holdings from the negative deposit facility rate is being considered having a negating overall effect. The pair is expected to challenge the lows of 1.0950s.

The Canadian dollar sees its recent rally against the greenback coming to an end after US inflation surprised the market to the upside. USD/CAD is up 0.2% as of this writing. We are seeing downward pressure coming from the oil futures market. WTI is down by nearly 2%, trading $ 54.50 a barrel. OPEC+ sees a risk of supply glut returning to the market as a result of higher shale production and subdued global demand.

Positive signals around US-China trade talks seem to be buoying the Aussie dollar. AUD USD now sits at 0.68760 after hitting a high of 0.68910.

The greenback failed to sustain its momentum after piercing the 108 level versus the Yen earlier today. Market mood has improved slightly after US officials signalled a delay in applying an increase in tariff rates on Chinese imports. The cautious risk-on sentiment is expected to weigh on the Yen.  Meanwhile, data out of Japan continues to disappoint. August PPI was at minus 0.9% for the year and July, core machinery orders fell by 6.6% reversing the rise of 13.9% surge in the previous month.