The Currency Market is Switched to Risk-Off Mode

The USTR announced that tariffs on several products manufactured in China will be delayed until mid-December, giving financial analysts a much-needed chance to breathe.

USD/CAD continues to trade within tight ranges after losing traction around the key 200-day technical level. The Canadian economic calendar is light this week. The main drivers remain oil crude prices, the ongoing trade spat between the US and China, and the growing expectation that the Bank of Canada may follow in the US Fed’s footsteps and secure its own rate cut. 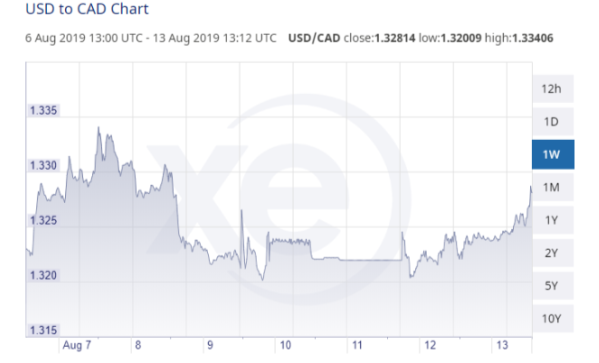 The US Dollar Index barely moved the needle following the release of US consumer price index data this morning. The core CPI rose 0.3% in July, bringing the all items index to 1.8% for the last twelve months.

The focus of the market remains on the battle being waged between the two major trading partners – the US and China. The latest inflation reading may, though, send the US President and the Twittersphere about the Fed not doing enough with rate cuts. Attention is likely to shift towards China by the end of the day with the releases of heavy-duty data: industrial output, employment and sales. The US Trade Representative announced that tariffs on several products manufactured in China will be delayed until mid-December, giving some financial analysts a much-needed chance to breathe sweet oxygen.

Data from the UK employment survey released this morning was mixed. The unemployment rate rose by 0.1% point over April-June. On the other hand, average weekly earnings increased by 3.9% for regular pay (excluding bonuses). The reaction from the pound was, at best muted, enjoying two-day temporary gains ahead of the 1.21 handle.

EUR/USD stays within touching of the 1.12 handle, ignoring worst-than-expected German ZEW Economic Index. The indicator, in August, points to minus 44.1 well below market estimates and recording a drop of 19.6 points over the previous month. The economic outlook for Germany has worsened substantially so far in August – which is no surprise to many. It is likely to drag growth in the region lower over the coming months. Escalation of trade tensions between China and the US leading to a currency war and the growing likelihood of a no-deal Brexit are the main drivers pushing sentiment to its lowest level in nearly eight years.

USD/CAD is trading around the mid-point of 1.32, directionless in a thin market. The loonie went through a volatile session after crude oil prices plunged by 9% over the previous week. In the absence of any major data releases from Canada this week, we expect the pair to be driven mainly by external factors: ongoing US-China trade tensions, oil prices, and growing local expectations that the Bank of Canada could be forced to buy an insurance rate cut in two weeks’ time.

The US Trade Representative announced that some tariffs on products like smartphones, video game consoles and other electronics will be delayed following phone talks between Beijing and Washington. This will hopefully provide some relief to countries like Australia, Germany, and other parts of the world that trade with China. AUD USD currently is hovering in the 0.6809 area, but may rise on this news.

Sentiment has switched back to a risk-off mode over an unpleasant growth outlook from the Eurozone, trade tensions and escalation in protests in Hong Kong. Traditional safe-haven currencies such as the Yen is expected to strengthen, and USD/JPY is vulnerable to lower lows. US inflation report card failed to attract USD bulls and Chinese data are expected to drive market sentiment this week.