The currency market has slipped into its board shorts and Ray Bans in preparation for tomorrow's Independence Day Holiday. The CAD and AUD are on the rise.

The Canadian loonie is standing firm against the greenback, oscillating around the mid-point of 0.7650 USD. USD/CAD continues to trade around an eight-week low and this can be a perfect time to do some cross-border shopping and catch those July 4th deals. Sentiment in the market is turning cautious after the Trump administration announced new trade tariffs on EU imports. This clearly signals that the US-led trade war is far from over and the global economy could see a marked slowdown in the near-to-medium term. 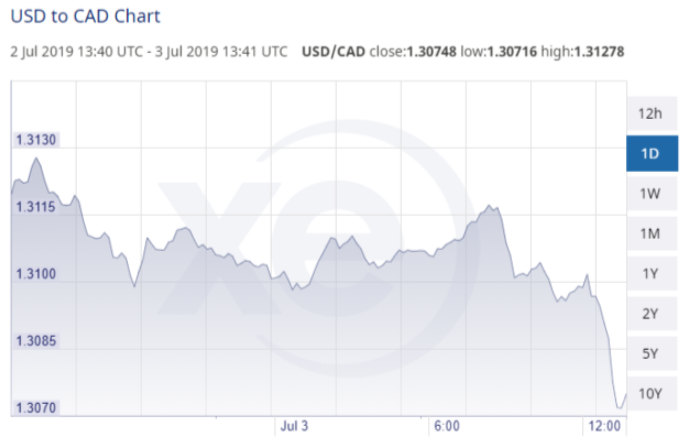 The US Dollar is trading mostly flat against the major currencies with the British Pound as the worst G10 performer today. Investors seem to avoid heavy directional bets ahead of the July Fourth holiday, and the release of key employment data (Friday). There is also a call for caution ahead of possible tariffs retaliation from the EU. The US Treasury Department announced that they are applying additional taxes to a new list of EU products. The economic calendar remains light and thin market liquidity is expected to drive the markets.

The Sterling is the worst performer among the G10 currencies this morning, under pressure from poor PMI and dovish comments from the Bank of England. The UK Services Index clocked 50.2 in June, with services sector stagnating. GBP also took another hit after Governor Carney pointed out that the British economy is set for a rocky phase with the global trade war and a No Deal Brexit becoming a “growing possibility”.

EUR/USD continues to trade around the 1.13 handle, hardly excited by better-than-expected June PMI. The index rose to 52.2, up from 51.8 from the previous month, signalling some pick-up in economic growth. Production sector, however, remains under contraction, falling for the fifth consecutive month. The musical chair for the next ECB President seems to be coming to an end and the market expects Christine Lagarde to follow the same cautious/dovish path as Chief Draghi.

SD/CAD is trading in tight ranges and remains near an eight-month low as investors seek clear direction. June Manufacturing PMI was up 49.2 in June, picking up a 41-month low of 49.1. The Index remains under key 50.0 mark, and the survey revealed the declining volume of new work contributed to the sharpest drop in production for three and a half years. We expect firmer oil prices to be supportive of the CAD in the absence of major economic releases.

The Australian Dollar is getting comfortable on its perch above 0.70 US Dollars today and has climbed by 0.44% since the open. Aussie investors are cheering on the currency as it recovers and looks to clear the hurdle of its two-month high.

Dollar-yen closed the gap and is now trading in negative territory as investors switch to risk-off mode. US threats to impose new tariffs on EU imports renews concerns of a slowdown in global economic growth. With the market closing early and moving into July 4th holiday mode, we expect the pair to trade within tight ranges.

Moving funds between international accounts?
Sign up for XE Money Transfer and transfer money online 24/7.
You get free online quotes, so you will know your costs before you book a transfer.