Currency investors are putting their money on safe-haven currencies like the Japanese Yen, and not gambling on currencies impacted by US-China trade drama.

The Canadian loonie lost momentum after touching a one-month high against its US counterpart. Better-than-expected retail sales were behind the initial move, but pot sales (and probably Doritos) was/were the product(s) which gave retail a boost, it couldn't keep the CAD on a high.

Global trade tensions and sliding oil (crude, not cannabinoid) prices shifted investor’s mood with the pair now trading within familiar ranges. We expect the loonie will trade with a slight negative bias from here with WTI oil prices crashing 3.25% lower on the day. 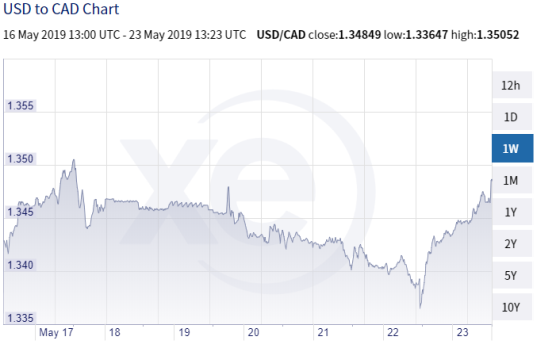 The US dollar is holding onto recent gains against most major currencies except the JPY and CHF. Risk-off trading activities see the flow of funds into trading safe-haven assets. Gold is trading $8 an ounce higher as market sentiment over trade tensions remain fragile. PMIs released across the world economies today are pointing to lower readings.

Economic data seems to have taken a backseat lately with politics and noises from the Twittersphere injecting unwelcome volatility into the currency market. Initial unemployment insurance claims, released this morning, came mostly in line with market estimates at 211k. The market now shifts its attention to the US Purchasing Managers Index and home sales data.

GBP continues to be under pressure amidst fierce Brexit political storm. Prime Minister May is still holding on tightly to the keys of 10 Downing Street, despite more resignation from the government and strong challenge to her leadership. The market now waits for the publication of the new improved Brexit plan which has already attracted criticisms from all political sides. The focus is squarely on Brexit, and economic fundamentals are taking a backseat,  thereby implying that the GBP/USD pair will continue to be volatile

Softer-than-expected PMIs pushed the Euro to a four-week low vis-à-vis the US dollar. Preliminary Purchasing Managers’ Indices for Germany showed manufacturing sector contracting to a two- month low in May. Export sales are also easing amid global trade tensions. There is now fear that negative sentiment could spread to the services sector. In a separate report, the Ifo Business Climate index for May dropped to 97.9 points from 99.2 points. Once again, company managers do not see an improvement in the current situation and the near-term outlook remains bleak for the German economy. EUR/USD is in danger of dipping to lower levels.

The Canadian dollar briefly touched a one-month high against the greenback, fuelled by surprisingly strong retail sales number yesterday. The move was, however, short-lived and lost its momentum with the USD/CAD pair now returning to familiar ranges. This morning, wholesale sales rose for the fourth month in a row, up 1.4% in March and beating market estimates. Yet, the pair showed little reaction and investors remain prudent. The oil futures price is also down, WTI is losing 2.25% and injecting a soft bias into the loonie.

The continued trade tensions between the US and China are not doing the Australian dollar any favours. Treasury Secretary Steve Mnuchin is too preoccupied with trying to justify to Congress why he can't turn over the President's tax returns, so he can't return with the US delegation to the negotiation table. This, and a suggestion that the RBA will drop interest rates soon are keeping AUD USD below 0.69 all this week.

Risk-off trading activities are pushing the USD/JPY pair towards the lower end of 110. The market seems to have largely ignored the softer PMI reading out of Japan. The Nikkei Flash Japan Manufacturing PMI for May came in at 49.6, falling into contraction. Companies are expected to reduce output and new orders have fallen for the fifth month in a row. Overall demand remains low and with growing trade tensions between the US and China, we expect the wider global economy to suffer from collateral damages. USD/JPY remains on course to challenge the sub-110 zone.