The greenback is trading lower against most major currencies, and the DXY Index is down by 0.1%. GBP/USD is in negative territory as MPs prepare a new vote before seeking extensions of the Article 50.

The USD-CAD pair is trading in a tight range with the market waiting for the FOMC meeting on Wednesday. The Fed is expected to keep rates unchanged and to remain “patient” in its approach. Investors will be carefully analysing the updated economic projections for future guidance. The Canadian dollar has attracted bids on the back of recent strong oil prices. 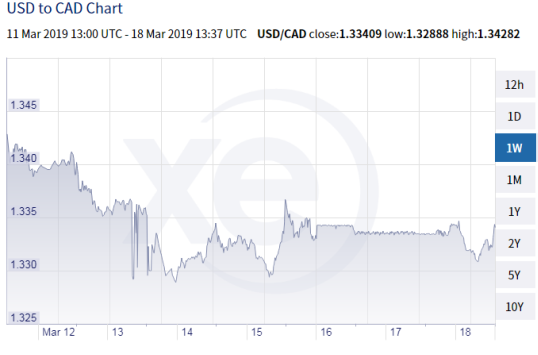 The US dollar is trading with a softer tone this morning as the market prepares for another week laden with significant event risks. The Fed delivers its policy decision on Wednesday. WTI is up 0.3% to hover near the four-month high. President Trump's commentary on interest rates seems to be having an impact on the currency. To drive exports, Trump would like the dollar to be weaker.

MPs returned to the House of Commons after voting against an “improved” Withdrawal Bill, a “no-deal” Brexit and looking to extend the Article 50. The Brexit drama continues this week with the House expected to hold a third vote before Theresa May flies to Brussels seeking a possible extension. The pound is likely to be volatile after recording a trading range of 3.3% last week.

From a sterling perspective, tomorrow’s vote should give the pound direction in the short term and the Bank of England’s interest rate announcement later in the week will be in focus. If the PM’s deal is passed, the BoE may start talking about interest rate hikes which will strengthen the currency. However, if the PM is not third time lucky – we may be heading for no deal.

EUR/USD is trading near a ten-day high on the first trading day of the week. There is no significant data release out of the Eurozone today, and the recent move could be attributed to short-cover rally. The euro has strengthened after ECB delivered a dovish economic outlook.  New developments around Brexit and trade talks between the US and China will be the primary movers.

The North American economic calendar is light today with international transactions in securities generating a record net inflow for the Canadian economy. Foreign investors bought $28.4 billion of Canadian stocks following a significant divestment in December.  USD/CAD is expected to trade in a tight range as investors look for new directions.

The antipodean currencies are trading higher following a strong performance in the oil market. The Aussie had a strong start out of the gate, hitting a high of 1.41261 relative to the USD before fading to 1.40881. USD NZD is at 1.45714 after touching a high point at 1.46187.

USD-JPY is oscillating around the mid-point of 111 after slipping 0.5% last Friday. The Bank of Japan sees the economy “expanding moderately” and believes a slowdown in China and Europe are acting as economic headwinds. Japan printed its first trade surplus since last June. Investors will be closely watching for the Fed statement and financial projections midweek for more trading actions.