The Currency Market is Tuned into the G20 Meetings in Osaka

Safe-haven assets and currencies attracted much of the investors’ flows this month at the expense of the greenback. The Japanese Yen is on course to close near a five-month high, with dollar-yen pair losing near 2% as June rolled out. US-led trade tensions and dovish statements from the Fed have led the market to believe that the global economy is heading for a slowdown and rate cuts are at the near horizon.

It is not surprising to see the global economy, trade, and investment priorities are among the main themes at the G20 meetings. The outcome of the meetings between President Trump and his counterparts will dictate the direction of USD/JPY. Hopefully, Trump will take a more serious tone when he speaks with President Xi than when he was asked about whether he would deter President Putin and Russia from interfering in the 2020 elections. 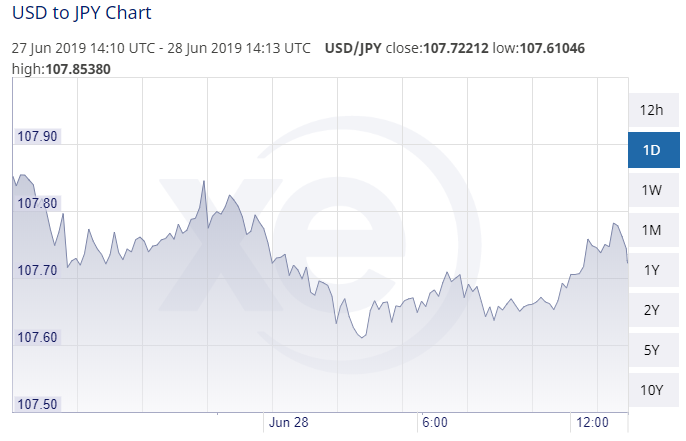 Our focus shifts to Osaka G20 summit where even mere handshakes will be heavily analysed and trollish rants from the Twittersphere are expected to inject short-term volatility into the markets. It will be a fairy-tale-like ending to the Summit if a trade deal is agreed upon between Washington and Beijing over the weekend. However, the outcome of the meetings may very well return global optimism by sending a signal to that both parties are willing to discuss anti-protectionism measures and intellectual capital ownership.

In the meantime, the currency market remains cautious, as investors avoid any aggressive directional bets. PCE price index in the US rose 0.2% matching estimates but failed to inject any trading activities. We expect month-end and quarter-end portfolio rebalancing to dictate the flows.

Gross domestic product in the UK increased by 0.5% over Q1 and supporting the Pound this morning. GBP/USD is up 0.27% on the day but well within recent trading ranges. The economy has shown some resilience, despite the political mess, growing by 1.8% compared to the same quarter a year ago. The market waits for the new PM and more clarity around Brexit.

EUR/USD stays range-bound, unable to break above the 1.14 post. Inflation in the euro-area came to the upside at 1.2% but failed to inspire the Euro bulls. Once again, the main theme in the market remains the ongoing G20 meeting. Investors are hoping strong resolutions are adopted to support trade and global investment over the weekend. Geopolitical factors and the growing threat of protectionism have been major headwinds for the euro area outlook.

USD/CAD dipped below the 1.31 handle after report card revealed Canadian GDP increased by 0.3% in April, beating market estimates. Wholesale trade expanded 1.4%, rising for the fourth consecutive month. The Canadian loonie is expected to finish the month strongly, near a five-month high as oil prices approach the key $60 a barrel valuation.

Currency investors that have an affinity for the Aussie and Kiwi dollars will no doubt be watching the G20 Summit discussions closely, hoping for firm handshakes and indicators of a trade deal between the US and China. If the two largest economies drop their tariffs, it will bode well for Australia and New Zealand.,It will stimulate China's appetite for trade with its other key trading partners, as well.

The greenback is shedding gains this morning, unable to find momentum above the 108 figure. The market is turning cautious as the proceedings on the G20 meeting starts. Economic data seems to have taken a backseat with inflation numbers out of Tokyo largely ignored. Japanese housing starts in Japan also recorded a severe drop of 8.7% in May. Dollar-yen will be moving with cautious as the pair look to close the month in the red for the second month in a row.

Moving funds between international accounts?
Sign up for a free XE Money Transfer account, book a free quote, and transfer money online 24/7. You get free online quotes, so you know your costs before you book a transfer.
"trump putin russia" by Book Catalog is licensed under CC BY 2.0