Following the weekend's G20 meetings in Osaka, Tariff Man is back to his old tricks, threatening to impose them on EU countries. The Aussie is stronger.

The European Central Bank seems poised to go against recent trends, and hold interest rates. Bloomberg reports that the ECB will play a game of wait and see until September, at which time they will decide upon what to do with interest rates.

EUR/USD rose above 1.13 briefly today before closing at 1.12923. EU leaders are bracing to become the next target of US tariffs. The Trump administration is justifying these taxes by pointing to European subsidies to Airbus, which the Trump team say gives the aeronautics company unfair advantages over Boeing. 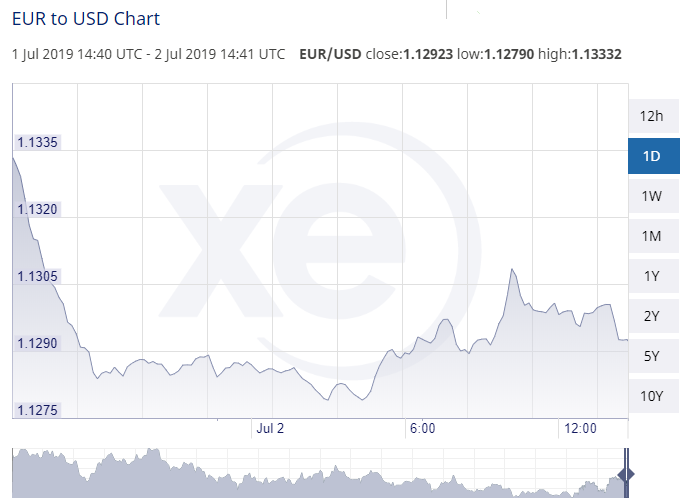 The currency market is trading relatively flat this morning in the absence of any major economic fundamentals. The US Dollar Index remains close to an eight-day high as market assesses escalation of trade tensions between the EU and the US. The Office of the US Trade Representative has issued a statement, indicating a new list of products that could face additional taxes with an approximate trade value of $4 billion. This is a swift reminder that trade protectionism measures will continue to dictate political/economic agendas. The market is expected to remain cautious in an Independence Day holiday-shortened week, with gold trading 0.4% higher.

GBP/USD bounced back briefly from a two-week low but remains in negative territory following the release of poor construction PMI report. The headline UK Construction Index was at 43.1 in June, below the key 50.0 no-change markets for the fourth time in the last five months.  This is also the steepest fall in ten years as the industry is crippled by growing political and economic uncertainty. The wait for the new PM keeps the pound under pressure. Bank of England Governor Mark Carney said he is taking a similar approach to the EU and taking a long look at global trends around economic policy and interest rates before making big moves. GBP USD dropped from a high of 1.26527 to close at 1.25923.

EUR/USD is steady this morning after yesterday’s 0.8% decline. German retail sales were weaker, down 0.6% in May compared to April whilst industrial producer prices fell by 0.1% during the same period. The tension between the US and EU is expected to heat up ahead of the proposed $4 billion tax bill on EU imports. The pair is expected to look for direction around the 1.13 handle.

USD/CAD is trading north of the 1.31 handle following a de-escalation of tensions between the US and China. The loonie was a strong performer in June, strengthening by 3.45% against the greenback on the back of strong GDP report and firmer oil prices. OPEC+ has agreed to maintain production cuts at least until the end of 2019.

The Reserve Bank of Australia lowered its cash rate by 25 basis points to 1% this morning on the back of concerns over domestic economic growth.  This move follows a similar reduction from the central bank last month.  Consumption is weak due to low-income growth and falling housing prices. The Bank believes this decision will help to mop up the economic slack building in the economy. The market seems to have already priced in today’s rate cut and the AUD is trading higher, up 0.45% on the day.

The greenback gapped higher against the Japanese Yen after the US and China steered away from inflicting new anti-trade measures. Both parties are, apparently back to the negotiation table, and the market is hoping the world's two largest economies can now agree on a trade agreement. The pair is, however, looking for clear direction before making its next move. The economic calendar is light, and the US-EU relationship will be tested over the next few sessions. We expect the dollar-yen to trade cautiously.