The Currency Market is Subdued Ahead of US Fed Metamorphosis

Data from Statistics Canada revealed that the economy shrank 0.1% in February after growing 0.3% in the first month of 2019. The declines were recorded in both the goods-producing and services sectors. The macro data seems to come in line with a recent assessment from the Bank of Canada. The central bank left rates unchanged citing lower growth in the climate of a global slowdown. USD/CAD quickly returned to trade within familiar ranges, unable so far to make any dent on the 1.35 handle. The FOMC announcement and US jobs data could be vital in directing the next moves. 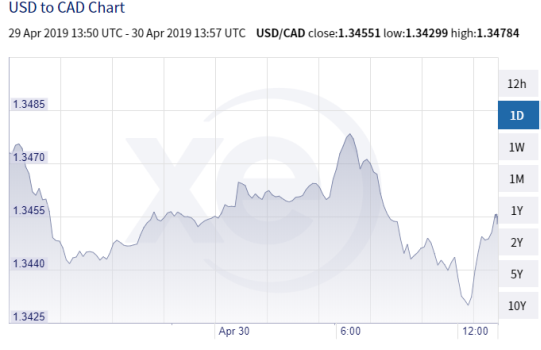 The US dollar is trading with a negative bias today, and the market is switching to a cautious mood ahead of the Fed metamorphosis process.  The FOMC starts its two-day meeting with a no-change decision, tinged with dovish tilt, already priced in. Fed watchers will be looking for further clues of easing in the post-meeting statement. External headwinds and global trade relations are likely to be among the leading causes of concerns.

Chinese PMI data showed new export orders were still shrinking albeit at a slower pace. The Dollar Index is down 0.35% with the British Pound on a sugar rush, trading firmer on new hope that a Brexit deadlock is very close.  WIT oil seems to have stabilised around $64.20 a barrel after coming under a Trump-inspired fire sale. The currency market is expected to trade in narrow ranges as we wait for the decisive Fed announcement.

The British Pound is trading firmer against its peers on the back of broad-based US dollar weakness. There are no major data releases today, so today’s rally could be attributed to “buy the rumour and sell the fact” move. Bank of England is likely to maintain policy rates unchanged with no progress on the Brexit front. Party negotiators are holding “constructive talks” with no guidance of substance on the way forward so far. GBP/USD is expected to see increased volatility over the coming sessions.

There was some excitement in the market after Eurozone signalled that the economic recovery is still alive. EUR/USD battles its way slightly above the 1.1200 handle following the release of GDP flash estimate. The bloc grew 0.4% quarter-on-quarter in 1Q 2019 better than consensus at 0.3%. Growth on a year-over-year basis was at 1.2%. However, the data should be interpreted with caution as it does not go far in details on the components of growth. The Euro is expected to trade at current levels after setting a new 2019 low of 1.1110 last week.

After an initial bout of volatility, the USD/CAD returns to familiar recent trading ranges. Canadian GDP contracted by 0.1% in February, following a 0.3% growth in January. The manufacturing sector saw a contraction in 8 out of the ten subsectors, while activities in the real estate, down 6.6%, recorded its fourth decline in five months.  The Canadian loonie is expected to ignore local data with market focus turning on the Fed announcement. BoC Governor Poloz is expected to deliver a careful assessment of the economy in his testimony before the Standing Committee in Ottawa.

Mounting selling pressure on USD intensified in the early NA session, the AUD/USD had a hard time finding traction. The Aussie most recently traded at 0.703841, losing 0.19% since yesterday as the AUD continues to feel the pressure of the disappointing Chinese data.

USD/JPY touched a three-week low following the release of soft PMI of out China. Caixin manufacturing PMI edged lower to 50.2 in April from 50.8 sending a subtle reminder that growth remains weak. New export demand also shrunk 49.7, although better than the 48.7 in March. The pair is expected to avoid any aggressive move with critical event risk (FOMC and NFP) on the cards.

Moving funds between international accounts?
Sign up for XE Money Transfer and transfer money online 24/7, from wherever you can access the internet on your computer or mobile devices.
You get free online quotes, so you know your costs before you book a transfer.