The greenback is trading flat against most major currencies as the Fed starts two days of meetings, though Canadian inflation surprises to the upside.

The British Pound is a top performer today, feeding on relatively persistent strong inflation numbers and cautious mood surrounding the greenback. The headline inflation number remains at the central bank’s target of 2%. However, we remain cautious and see any further gains likely to be capped. Brexit uncertainty will undoubtedly resurface once the country has a new PM. The path to exit from the EU will be bumpy. 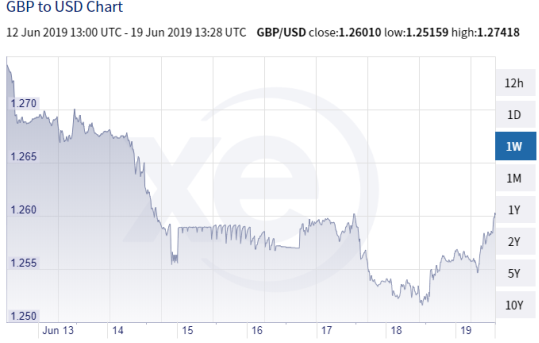 The Federal Reserve moves to centre stage today and is expected to maintain its fed funds rate in the target range of 2.25-2.50%. The market will sift through the updated economic projections and the famous dot plot to gauge for any major departure from current monetary policy. Trade and economic growth are interlinked.

So, an assessment of the impact of ongoing trade tensions on US economic futures will be of utmost importance. Trade and currency are also interlaced. Today’s monetary policy decision may prove to bring seismic movement in the currency and broader financial markets. For now, the US Dollar Index sits atop a two-week high. We expect volatility to go multi-notch higher after the key announcement and during the inevitable FOMC press conference.

The UK's Consumer Price Index (CPI) matched market consensus but eased lower from 2.1% in April. Headline 12-month inflation number was 2.0% in May 2019 in the UK. The Pound is now extending its two-day gains but further upsides could be capped. Market participants are likely to switch to a cautious mode ahead of key developments around the Conservative leadership contest. Political bickering is not likely to fade away and we expect a bumpy ride for the next PM in trying to exit from the EU. GBP/USD also waits on another event risk: The Bank of England announces its interest rate decision tomorrow.

The Euro is hanging on around the 1.12 handle with all eyes cast on the Fed. EUR/USD dove yesterday following worsening economic sentiment and dovish comments from Draghi. The market is now pricing in more easing from the ECB if the Eurozone fails to get out of its economic morass.

The loonie climbed against the greenback for a second successive day after headline Canadian inflation beat market’s estimates. The Consumer Price Index was up 2.4% on a 12-month basis in May, rising from 2% in April. With central banks around the world looking to ease their monetary policies, the Bank of Canada could be facing a tough balancing act with rising local inflation and elevated levels of household debt. USD/CAD now waits for the Fed decision for further trading action.

The Australian dollar is having its fifth day in the doldrums in its last six. Ahead of Fed meetings, AUD USD is in the 0.68s and lost some of the traction it gained in yesterday's session.

USD/JPY remains in consolidation zone, with the greenback fetching 108.50 Yen ahead of central banks’ decision. The Fed may need to adjust its economic forecasts lower amidst lingering trade tensions and the theme for today’s statement will be “patient”. The market will also keep an eye on the updated dot-plot for future policy guidance. The Bank of Japan is expected to stick to its current monetary policy but could open the door for further stimulus packages.

You've made it all the way through this article, so you're clearly interested in international currencies. Why not open an XE Money Transfer account for your cross-border payments? Take advantage of this brief period of tranquility before Brexit drama kicks in again.