The Cost of Brexit Uncertainty

With the ‘final date’ looming for Brexit, uncertainty in the market is again becoming a barometer for the relative strength of the pound. Whether you are a ‘Remainer’ or a ‘Leaver’, much of the impact of Brexit overall can be said to have come from a lack of clarity in planning and definitive answers.

When examined in detail, the correlation between British currency and uncertainty is fairly quantifiable

The Brexit referendum provides a surprising result versus the commonly held views of the majority of the finance industry. England was the deciding factor in the vote’s final direction with an edge of 1.9m votes sealing the deal.

The principal factors that influenced the thinking of many voters during the referendum were uncertainty over fair trade, immigration and national security. The result of the vote threw markets into turmoil as a general fret grew about how the ‘divorce’ would happen and what this would mean in the future for the economic and social wellbeing of the UK.

GBP reacted with its biggest intra-day collapse in 30 years, with values falling more than 10% in the following hours.

David Cameron announced that he would step down as Prime Minister and the lack of direction in leadership weighed heavily on the pound. Now, not only does our country we not know what we are doing, we don’t know who will get us there.

Following confirmation of May’s position as the new UK Prime Minister, she announced that Article 50 would be triggered (the clause in the Lisbon Treaty that invokes extraction from the EU). The pound performed with whipsaw volatility and lost ground to a three-year low against the Euro and a found further record intra-day lows.

Interestingly, the impact of uncertainty can manifest positively as well. Take the snap election in June 2017. Markets reacted positively to this news, believing that – if the Conservatives found a greater majority – the negotiations could be handled more smoothly.

This can be seen over many events since. To summarise: 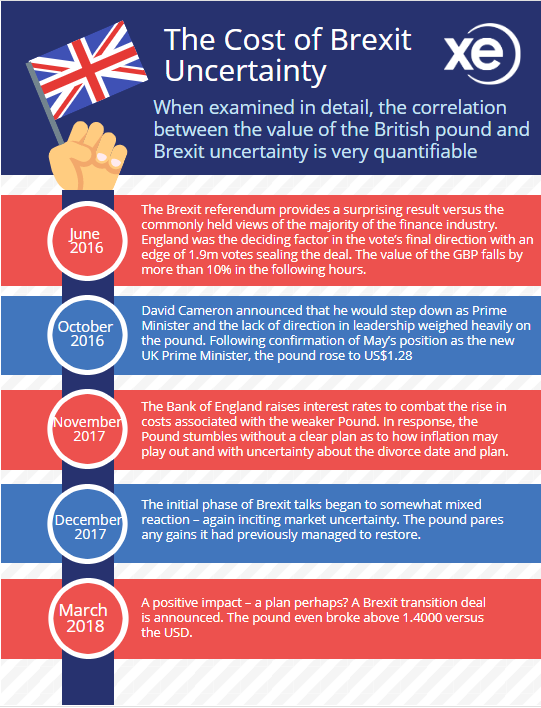 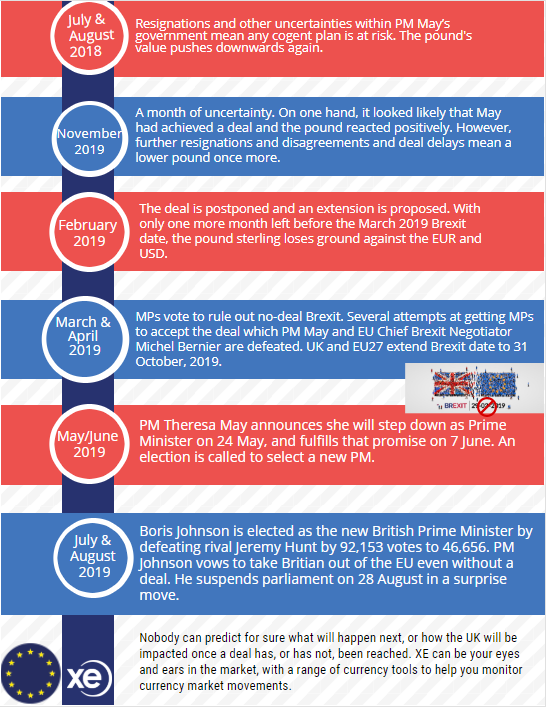 The Bank of England raises interest rates to combat the rise in costs associated with the weaker Pound. In response, the Pound stumbles without a clear plan as to how inflation may play out and with uncertainty about the divorce date and plan.

The initial phase of Brexit talks began to somewhat mixed reaction – again inciting market uncertainty. The pound pares any gains it had previously managed to restore.

A positive impact – a plan perhaps? A Brexit transition deal is announced. The Pound even broke above 1.4000 versus the USD.

Resignations and other uncertainties within May’s government mean any cogent plan is at risk. The pound pushes downwards again.

Mixed here. On one hand it looked likely that May had achieved a deal and the Pound reacted positively. However, further resignations and disagreements and deal delays mean a lower Pound once more.

The deal is going to be postponed and an extension proposed and, of course, Sterling loses ground.

The result of a detailed examination at these events seems fairly clear. Leaving versus Remaining is not a particularly central issue regarding price levels and movement. The idea that markets react positively if there is certainty in actions and cohesion in government and the converse is true as well. Of course, there are other factors at play.

The emotional nature of the issues central to the volatility have a somewhat cyclical effect of inviting far greater market participation – meaning that any impact is heightened, for example.

So, in context of where we are today with a final date looming. What does this mean for the Pound? In essence, there is a case to suggest that this going right to the wire means the levels of uncertainty are as high as they have ever been. If we have learned one thing, it’s that market volatility is coming hand in hand.

Parliamentary Delay and the Impact on the Pound

The pound dropped by a cent yesterday (2019-08-29) in reaction to the UK Prime Minister Boris Johnson’s move to delay parliamentary proceedings for about five weeks, paralyzing any attempt by the opposition parties to pre-emptively block a no-deal Brexit by legislation.

The Queen approved Johnson’s request to suspend Parliament until October 14 which in turn limits the  window to debate the Brexit process increased the likelihood of a Hard-Brexit on October 31. Opposition MP’s from across the House have reacted angrily, however it raises the likelihood of a No-Deal scenario significantly.

GBPEUR: The pair fell yesterday after the announcement that Boris Johnson would seek a suspension of parliament – a move that has since been supported by the Queen. The cross fell rapidly but has since shakily recovered. Trading currently at 1.1058 at 08:45 GMT

GBPUSD: A similar story here as Sterling crashed against the Dollar as well, although the net result at the time of writing is not nearly as sharp a loss as with the EUR.

In both cases, the pound will remain volatile until the current parliamentary story has developed further

EURUSD: As predicted yesterday, the cross has continued a slow erosion and generally drifted downwards. There appears no significant reason why this should change today.

Please contact us for more info about your international payments, login or click here to register and save now.