The Canadian dollar continues to remain under pressure, losing nearly 2% of its value since the start of the year.

The Canadian dollar continues to remain under pressure, losing nearly 2% of its value since the start of the year. USD/CAD touched a two-month high as investors expect a dovish outlook from the Bank of Canada. The central bank is expected to keep its overnight rates at 1.75% tomorrow, citing concerns over household debt. The member of the Governing Council could also cry wolf, sharing the same sentiment as the Fed. 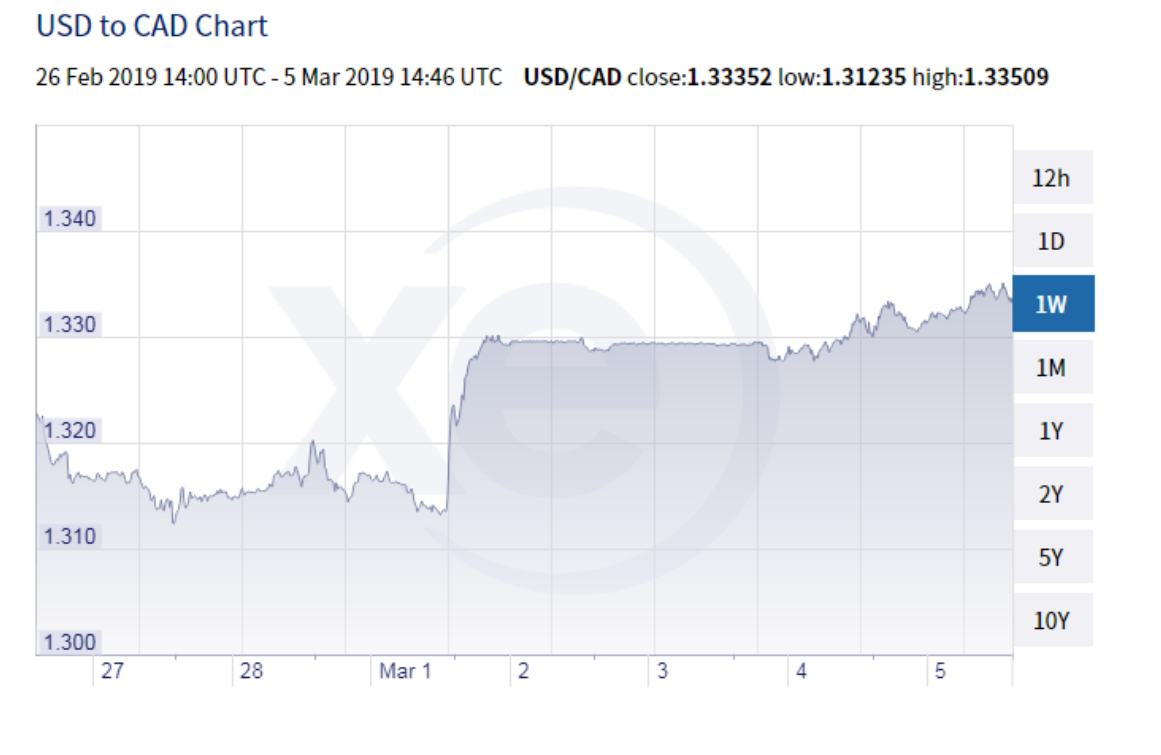 The greenback is trading higher against the major currencies, with the DXY Index moving 0.1% near two week high.  The focus today will be on the ISM non-manufacturing report which is expected to show slight improvement.  Meanwhile, the British Pound comes under heavy selling pressure, down 0.4% on the day. Uncertainty and political noises surrounding Brexit make investors nervous as we approach the key March 12th Parliament vote. Asian equities closed in the red after Premier Li Keqiang downgraded Chinese growth outlook citing “tough struggle” and dragging antipodean currencies lower.

In the UK, Brexit continues to have significant and adverse effects on the economy. Employment numbers plunged at the fastest rate for over seven year and growing concerns over the near-term economic outlook. UK Services PMI improved marginally but also revealed businesses are delaying investment decisions amidst political uncertainty. GBP/USD is down 0.5% on the day and waits for BOE Governor Carney’s testimony before the House of Lords later today.

The EUR/USD is improving after touching a two week low yesterday. The IHS Markit Eurozone PMI Composite Output Index revealed firmer growth of the Eurozone’s private sector economy last month. The index touched a three month high, strengthening to 51.9, up from 51.0. In Germany, optimism is making a timid comeback with Business Activity Index improving further from December’s 27-month low. The Index rose to 55.3 in February, up from 53.0 (Jan) with a pick-up in new work and employment. The latest readings help to alleviate fears of full-blown recession facing the Euro bloc.

USD/CAD is trading 0.15% higher, touching a 6-week high this morning. The Canadian loonie remains under pressure over recent poor data and brewing political storm for the government. Investors are also cautious ahead of the Bank of Canada meeting tomorrow. The bank is widely expected to keep rates on hold.

AUD/USD is trying to recover after sliding nearly 1% yesterday. Better than expected Caixin China Manufacturing PMI helped the AUD to bounce above the 0.71 handle. Investors will be closely watching for China’s trade numbers next week along with the central bank’s decision. The RBA is expected to keep rates unchanged

Dollar-yen remains in consolidation mode near an 11-week top, just below the 112 handle. Market participants wait for more concrete development over the US-China trade talks and NFP data for directional moves. The USD remains in a strong position despite call from the President for a softer dollar.