GBP/USD is trading with a positive bias this morning after reports emerged that the House of Commons voted to hold more indicative votes. The pair reversed from the session low and is up 0.7% as the market is hoping for a successful outcome despite the growing uncertainty. The legal exit date is April 12th. 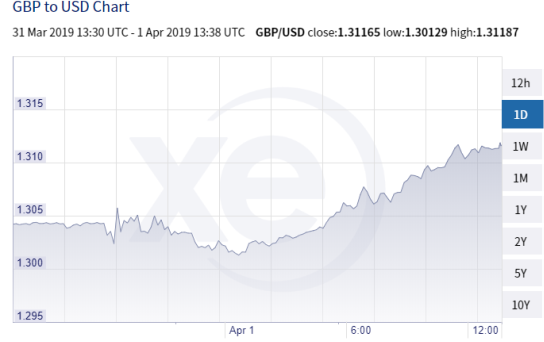 The US dollar starts the first session of Q2 with a weak footing, down 0.15% against its major peers. Advance estimates for February retail sales were down 0.2% from the previous month. The market was expecting a growth of 0.3% and the focus now switches to the ISM manufacturing data. Investors’ sentiment received a boost after Caixin China Manufacturing PMI signaled growth: the headline indicator came in at 50.8 for March, the first progress in four months.  New export orders also rose, and we expect improving Sino-US negotiations will ease fears of trade tensions.

The UK Manufacturing PMI peaked to a 13-month high as the economy continue to show signs of resilience despite the ongoing Brexit uncertainty. The PMI jumped higher because of build-up in inventories. The House of Commons is expected to hold more votes on alternatives to the Withdrawal Bill this week and is hoping to find a breakthrough. The Pound is up trading 0.6% higher against the US dollar but remains volatile.

EUR/USD remains inside a narrow trading range as the market continues to assess the impact of regional and global uncertainties of the Eurozone. German manufacturing PMI dropped to its lowest reading since July 2012. The headline number was at 44.1, down from 47.6 in February and below the key 50 contractions/expansion mark. The weak auto sector, soft global demand and more uncertainty surrounding Brexit continue are all contributing to lower export sales and new orders.

The Canadian loonie is trading within a consolidation zone, after closing last week strongly on the back of a surprising better-than-expected GDP reading. Manufacturing PMI will provide more input on the economic growth outlook whilst market will also keep an eye on Governor Poloz speech later today. The CAD is attracting bids with the WTI oil futures trading at fresh 2019 high near $61 a barrel.

The Australian Dollar has remained under pressure over the course of the first quarter. Ongoing concerns about the trade war between the USA and China as well as concerns about falling house prices in Sydney and Melbourne have also weighed on the outlook.

Dollar-yen is feeling dizzy near a seven-day high and giving away gains this morning. Market waits on US ISM manufacturing data before taking more directional bets. Meanwhile, Nikkei Japan Manufacturing PMI slumped to its fastest rate as a result of weaker overall demand. The future outlook remains gloomy and the pair is likely to trade with a bearish sentiment with the 111 targets on sight.