The British Pound is waiting for the outcome of the second meaningful vote and investors, businesses are hoping for more clarity on the painful divorce process.

The British pound is waiting for the outcome of the second meaningful vote and investors, businesses are hoping for more clarity on the painful divorce process. Though the GBP/USD has recorded gains over the past two months, the pair remains vulnerable to wild volatility. PM May was apparently able to secure an improved deal but there are doubts if it will secure majority vote. 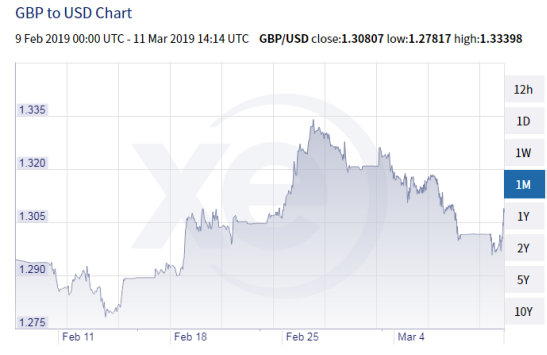 The US dollar is trading lower this morning after data released this morning showed CPI increased by  0.2% in February, matching market’s estimates. The All Items Index rose 1.5% over the past 12 months, lower than the 1.6% rise for the year ending January.

The Parliament vote on new Brexit deal takes the centre stage. The UK PM was able to finally clinch a last-minute deal yesterday. An adverse outcome of today’s vote can trigger a series of events sending the GBP into a volatile session. GBP/USD is down nearly 1.20% on the day with the safe-haven currencies trading with firmer tones. Gold is also up $6. WTI jumped to refresh week high on growing expectations of prolonged supply cuts.

The Sterling is under intense selling pressure this morning, down 1.25% as of the time of this writing. House of Commons is set to vote on upgraded Brexit deal. A failure to gather enough support would send the GBP into uncertain black hole. Market seems to ignore monthly GDP releases. Data showed the UK economy grew 0.5% in January with services sector as the largest contributor. GBP/USD is expected to be very volatile.

EUR/USD is trading higher for the third consecutive session, up 0.2% as we enter the NA session.  The pair dipped below the 1.12 handle after ECB was deemed to be dovish last week. All eyes will be on the vote in UK Parliament, and we expect the euro to be quite volatile.

USD/CAD continues to travel south after reaching its highest level in two months last week. The loonie is drawing support from a strong oil market. WTI is up nearly 1% on the day. With no major data release on the docket, we expect the pair to search for new direction and trade along global market sentiment.

Dollar-yen continues to search for new lows, with the pair down 0.20%. Risk-aversion trades are supporting safe-haven currencies. The market is nervously waiting for the outcome of the Meaningful vote before betting on new directional moves.