The GBP is up 0.5% on the day with Brexit X-factor dictating market sentiment. WTI Crude oil at $52.80 a barrel, is trading lower (-1.5%), extending yesterday’s decline over weak Chinese data. 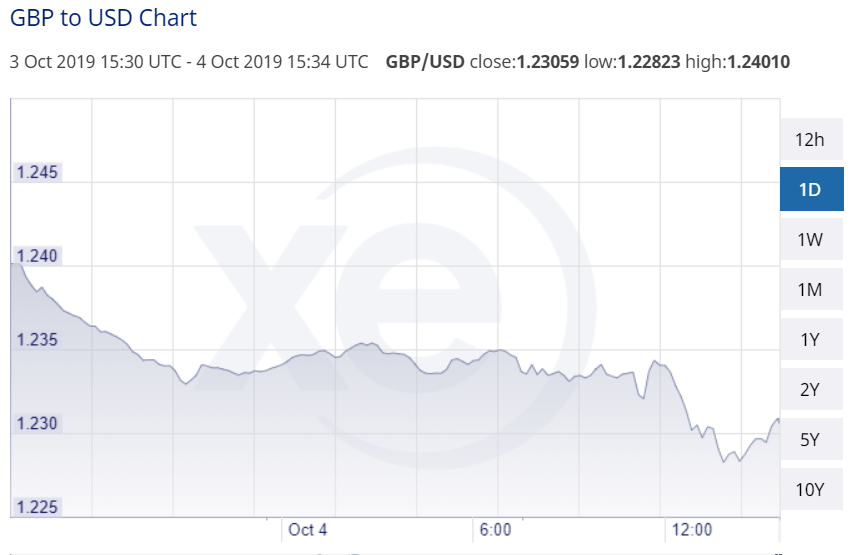 The US dollar index is trading flat this morning with antipodean currencies feeling downbeat on soft Chinese factory data. Consumer price inflation rose 3% last month in China (pork prices jumping 69% year over year) but key Producer Price Index (PPI) registered a decline, for the third consecutive month, of 1.2%. The focus, this week, will be on more Chinese data (growth, retail sales and unemployment) as investors take a pulse on the ongoing weakness of the economy. They will also account for threat of new tariffs and or a partial trade agreement between Washington and Beijing.

US Treasury Secretary Mnuchin was quoted as saying new rounds of trade taxes on Chinese imports are still a possibility if no agreement is reached by December.

The market is keeping a close tab on new developments around Brexit – there is now a growing likelihood that a deal is possible before October 31st. Once again, we expect trading in the currency pair to be choppy and to be driven exclusively by incoming reports and noises on the UK’s exit process from the EU.

The Euro is in consolidation mode, trading in tight ranges this morning. The pair is holding onto recent gains despite the latest ZEW Indicator for Germany showing a decrease of 0.3 points this month, slightly better than market estimates. However, the assessment of the economic situation in Germany has worsened again. At minus 25.3 points, the reading is at its lowest point since April 2010. With no significant data releases from the US docket, we expect the EUR/USD to oscillate around current levels and with downside risk.

USD/CAD is feeling bloated with Canadian markets opening after celebrating Thanksgiving. The greenback plunged by nearly 1.3% last week on a strong Canadian labour market report. The pair is now consolidating around the 1.3220s. Oil futures prices are trading lower after soft Chinese data is sending fears of a global economic slowdown.  We expect the market to avoid heavy directional bets ahead of the release of inflation numbers tomorrow.

AUD USD reached a high mark of 0.6789 in reaction to the release of meeting minutes from the October RBA monetary policy meeting. The central bank indicated it was open to further easing of monetary policy. Confusing reports about the status of US-China trade talks aren't doing antipodean currencies any favours of late.

The greenback is trading lower, fetching 108.25 JPY over pessimism over trade negotiations between the U.S. and China. Contradicting reports from the US Treasury and Chinese spokespeople on ongoing negotiations are making investors nervous. As a result, USD/JPY sees a halt to a four-day rally, after hitting a high of 108.62 on last Friday. With the US economic calendar relatively light, we expect the pair to be driven by broader market sentiment.

Moving funds between international accounts?
Sign up for a XE Money Transfer account and transfer money online 24/7.
You get free online quotes, so you know your costs before you book a transfer.