The Brexit Vote - Everything You Need to Know

The next significant milestone in the UK’s exit process is a meaningful vote on Brexit, scheduled for Tuesday 12 March.

During the last few weeks, the pound has risen on the back of positive sentiment as currency markets believed the chances of a “no deal Brexit” had diminished. This can be partly attributed to the resignations of a number of Labour MP’s. The assumption was therefore made that Theresa May may be able to convince enough Labour MP’s to vote for her plan.

This however should not be taken for granted and the possibility of a “no deal” Brexit remains with little progress being made in Brussels and senior members in the Labour party saying the PM will only manage a very small amount of support from the Labour party. 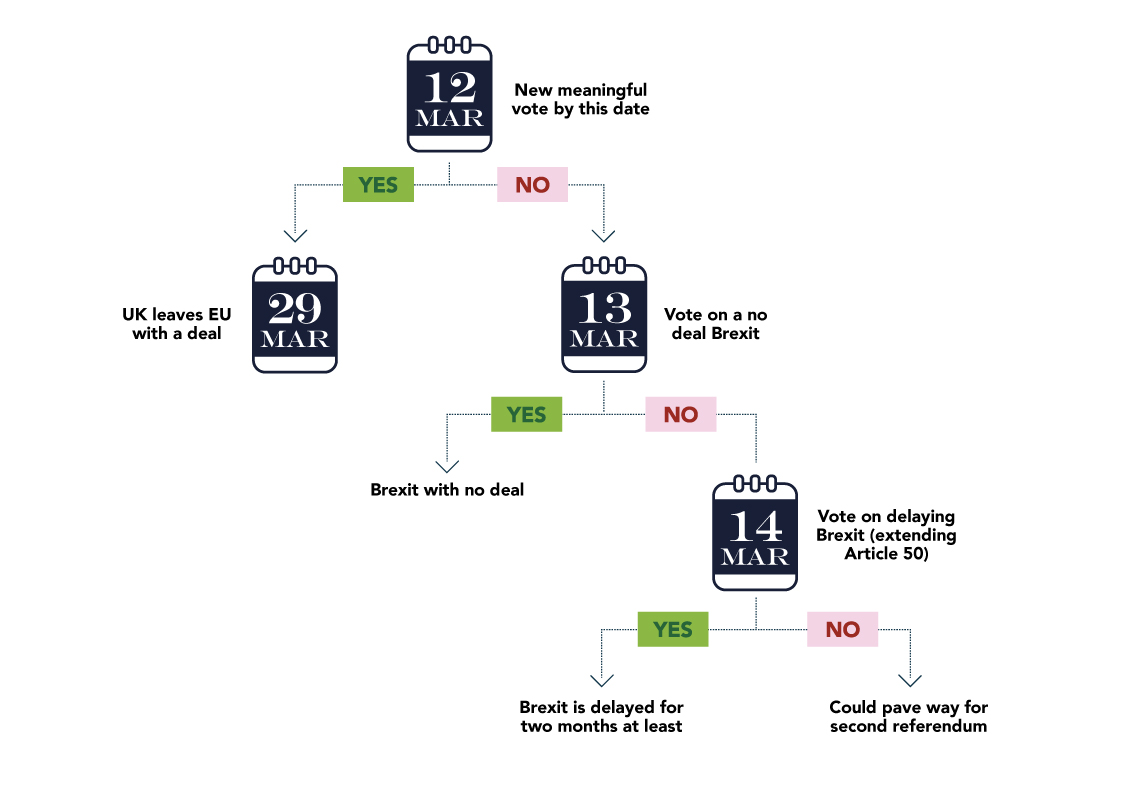 Brexit Meaningful Vote Outcome Flow Diagram
The next significant milestone in the UK’s exit process is a meaningful vote, scheduled for Tuesday 12 March. On this day, MP’s will vote on Theresa May’s Brexit deal.

If the 230-vote defeat on 15 January is overturned Brexit happens on the terms of the new deal. However, if the deal is voted down, then there is the potential for yet another 2 days of voting:

Wednesday 13 March – Vote for Brexit with no deal. If MPs do not agree to this scenario, then there will be a further vote on March 14.

Thursday 14 March – Delay Brexit and keep negotiating.  If MP’s vote against the deal and against no deal, Theresa May could ask for more time to seek changes. If MP’s agree with this then Brexit could be delayed for a further two months. However, if MP’s vote against more time, then these events could potentially pave the way for a 2nd Referendum.

Nobody can predict what will happen next week, or how the UK will be impacted. It seems reasonable to assume that we can expect volatility for the pound as the week progresses.

You should look to quantify your risks against all possible outcomes, and we can be your eyes and ears in the market, with a range of currency tools to help you monitor market movements. With an XE Money Transfer account, you can also create personalised Rate Alerts to let you know when your desired exchange rate becomes available.

If you’d like to discuss your situation with us in more detail, please contact us and our team will be happy to help.

The information, materials, accompanying literature and documentation available on our internet site is for information purposes only and is not intended as a solicitation for funds or a recommendation to trade.

XE its officers, employees and representatives accept no liability whatsoever for any loss or damages suffered through any act or omission taken as a result of reading or interpreting any of the above information.

While we take reasonable care to keep the information on the website accurate and up to date, there may be occasions when this is not possible. Case Studies and articles are not intended to predict future moves in exchange rates or constitute advice. XE makes no representations, warranties, or assurances as to the accuracy or completeness of any information derived from third party sources. If you are in any doubt as to the suitability of any foreign exchange product that you are intending to purchase from XE, we recommend that you seek independent financial advice first.