Mexico is the Latest Dance Partner in Trump's Tariff Tango

The Mexican peso showed an immediate reaction to the US President Trump's latest salvo against asylum seekers. The peso dropped by nearly 4% after the US announced 5% tariffs.

The Mexican peso showed an immediate reaction to US President Trump's latest salvo against asylum seekers. The peso dropped by nearly 4% after the US Administration signalled its intention to levy 5% tariffs on all imports from Mexico. The USMCA could be jeopardy and investors went into a panic mode, preferring the safety of safe-haven assets. The market is still trying to digest the fresh announcement and we could see move trade-induced volatility in the USD/MXN pair. 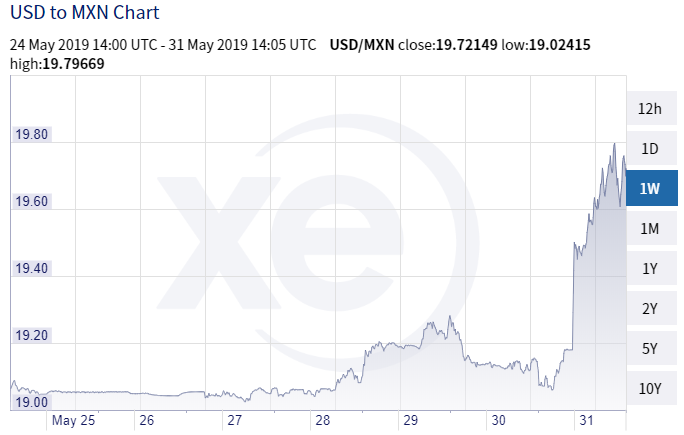 The 10-year Treasury yield touched a new 20-month low amidst growing fear of a tariff-led global recession. The move to ratify the USMCA could be thrown in a disarray following the latest announcement. Meanwhile, escalation trade tensions between the US and China is starting to bite into sentiment with the latest Chinese manufacturing PMI falling into a contraction zone.  We expect the currency market to move with a cautious bias with month-end rebalancing flows dictating the pace. Investors are seeking the refuge of safe-haven assets as we enter the final session of May. Gold climbed close to $1300 an ounce.

GBP/USD hits a fresh four-month low as investors are growing impatient with Brexit uncertainty and global trade tensions. Lack of significant domestic data is also undermining the pound's prospects.  Across the pond, the market welcomed better than expect personal consumption expenditure report. Core PCE rose by 0.2%. GBP/USD is expected to continue trade with a negative tone.

The Euro is trading dangerously close the key psychological 1.11 level. The shared currency has lost nearly 1.5% of its spot value this month, plagued by softer than expected economic data, ongoing uncertainty over Brexit and global trade tensions. We expect the shared currency to remain under pressure as the US and EU prepare to discuss future trade relations.

USD/CAD jumped to a four-month high after the US Administration signalled its intention to impose trade tariffs on Mexican imports which could be against the recently agreed USMCA trade deal. The move caused initial panic in the market and with oil futures price pointing lower, the loonie could only go south.

The CAD is now recovering from earlier losses after the release of better than expected GDP figure. Gross domestic product for March rose 0.5%, fuelled by stronger performance from the services sector. We expect the pair to trade around current levels whilst trying to establish a new range.

AUD USD climbed above 0.69 again in today's trading. The RBA will be releasing its latest monetary policy updates on Tuesday, and some macro data releases as well. Our APAC trading team will surely provide in-depth analysis which we'll steal to put in next weeks' reporting.

Dollar-yen declines to a new four-month low as well, the move triggered by growing risk aversion trades. The 10-year US Treasury bond yields are trading lower and global trade tensions along with geopolitical risks weighing on investors’ sentiment. The market conveniently ignored soft Japanese data: Consumer confidence was below forecast and core inflation remains muted. The Yen has appreciated by nearly 3% this month driven mainly by risk-off trading activities.

Sign Up and Get a Free Quote In Minutes