Sterling Surges as the “Backstop” Makes an Exit

British Parliamentarians, citizens and expats all eagerly await the EU's response on PM Johnson's revised separation proposal. Consumers steel themselves to learn about US tariffs on EU goods.

Financial markets are bracing themselves for a new wave of trade taxes from the US on EU products. The former has won the largest arbitration award in World Trade Organization (WTO) history in its dispute with the EU over illegal subsidies to Airbus. 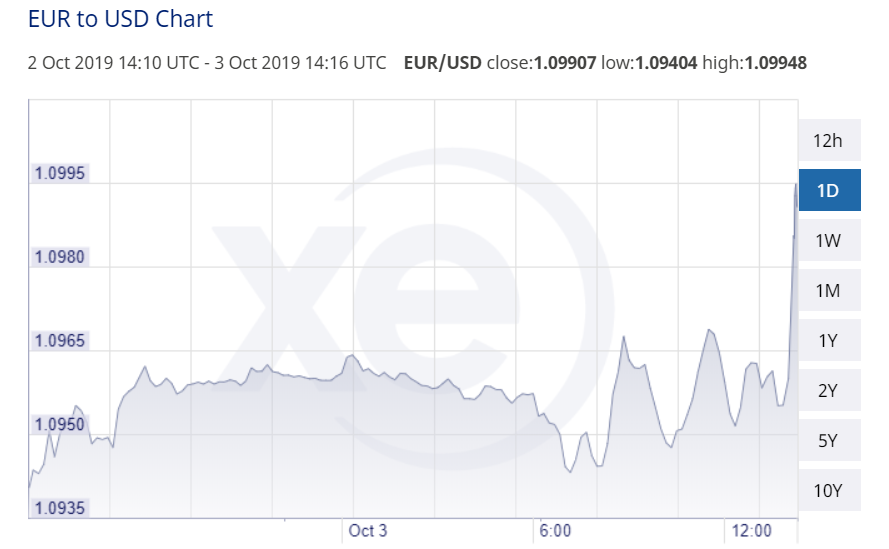 The US Trade Representative signalled its intention to apply “WTO-approved tariffs on certain EU goods beginning October 18”. Taxes will come first and then a tedious process of US-EU trade talks begin. In the meantime, the cost for businesses and consumers will increase by 10% on large civil aircraft to 25% on agricultural and other products.

The economic outlook looks suddenly bleaker with consumer confidence already running at a low and a global economy teetering on the border of recession. We should expect the flow of funds moving into traditional safe-haven assets. Gold prices are moving higher towards the $1,500/oz mark. Oil market toils lower to a two-month low with WTI down 0.5% on the day.

The world awaits a formal statement from the EU to PM Johnson’s UK-EU exit proposals. The major is oscillating around the 1.23 handle with investors avoiding heavy directional bet on the direction GBP/USD. Meanwhile, HIS Markit/CIPS UK Services survey revealed a contraction in sentiment and the largest cut in employment in over nine years. The Index fell to 49.5 last month from 50.6. With declines recorded in manufacturing, construction and service sector, the GDP is likely to fall in Q3, adding to the risk of a recession. For now, however, the market prefers to focus on developments surrounding Brexit and market mood will see heightened volatility

The EUR/USD seems to be capitalising on short term gains with growing political woes and soft data out of the US. The pair is up  0.02% at 1.0969 amid broad-based US dollar weakness. We expect further advances to be limited. Eurozone PMI for the services sector has slowed down. The Index dropped from 53.5 to 51.6 in September. With both the manufacturing and services sectors coming to a halt and US intending to apply tariffs on EU products, there is a growing risk of a recession for the Euro bloc. The shared currency is expected to trade with a heavier tone.

USDCAD finally broke its recent consolidation range between the 1.32 to 1.33 to the upside despite the absence of any major data releases. It seems the market has finally taken notice of sliding oil prices to send the Canadian dollar to a 4-week low. WTI crude oil has fallen near 19% since the attack on oil facilities in Saudi Arabia. With a slew of negative macro data surfacing this week, negative sentiment seems to have finally caught up with the Canadian dollar.

AUD USD has capitalised on recent weakness in the greenback, and after hitting a decade-long low of 0.6672 earlier this week, the Aussie is now trading at 0.6720.

The Japanese yen has strengthened further against the greenback following the release of weaker than expected job data, ISM and political woes in the US. Dollar-yen at 106.90 is now trading near a three -week low. The market is also turning cautious after the US indicated its intention to slap trade taxes on EU imports after winning its WTO case on illegal subsidies to Airbus. The market will now switch its attention to U.S. unemployment benefit claims, factory orders and this month's non-manufacturing survey.