The market is also seeing a move away from traditional safe-haven currencies with the Japanese Yen and Swiss France trading lower. Unless a trade agreement between the two largest trading partners is pencilled in, we expect uncertainty to prevail and anti-trade measures to act as a brake, slowing down the global economic engine. Sterling, meanwhile, continues to collect gains, up 0.65% on the day, on the back of a fading no-deal exit scenario. The market is, however, expected to turn cautious ahead of Friday’s job report. 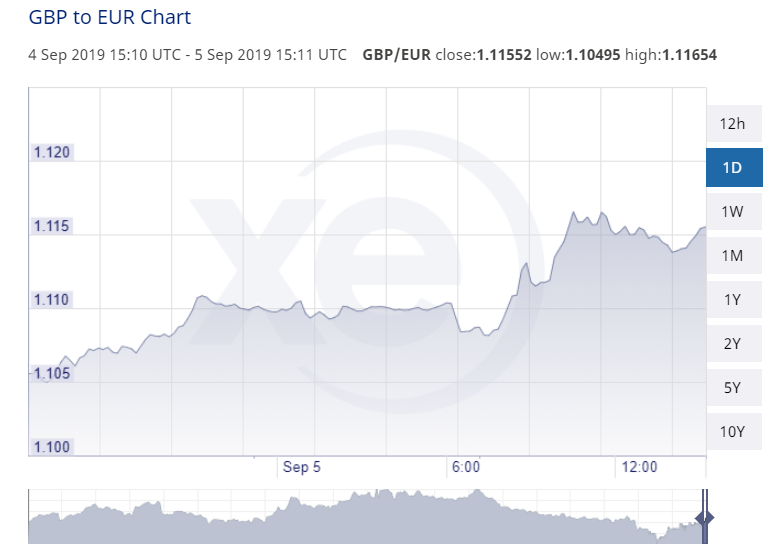 The US Dollar Index tumbled for the third session in a row as sentiment switches to risk-on mode. The trigger came from reports that US and Chinese trade officials are planning on a Halloween meeting. Global market indices are flashing green in what could be an over-reaction to the news.

The Pound is defiant despite the ongoing political drama being played out in the UK Parliament. PM Johnson tasted another defeat, failing in his bid to call for a general election. The opposition seems to have agreed on a bill – yet to be debated - to block a no-deal exit from the EU. At this point, the market seems to prefer another extension of the exit departure time. The rally though could fizzle out over new Brexit developments.

EUR/USD is maintaining a bid tone around the mid-point of one-ten as the greenback continues to suffer from broad-based weakness. The market seems to have conveniently ignored the latest lagged-manufacturing figures out of Germany. Reports showed new orders in manufactured products declined 2.7% in July over the previous month. There is now a growing expectation that the ECB will inject a stimulus dose earlier than expected in order to prop an ailing Eurozone.

USD/CAD is trading at its lowest level in three weeks in reaction to a no-change decision by the Bank of Canada. The market seems to take the accompanying statement as neutral, despite telegraphing a downward move in interest rate could be on the cards at its next meeting. The market will sift through the speech of Governing Council member Schembri’s today for further clues.

AUD USD rose to its highest level since August 1 to touch 0.6826 before strong employment numbers from the US lifted the greenback over the Aussie.

Dollar-yen firms further on reports that trade talks between the US and China are back on track with a meeting scheduled to be held in October. The greenback is currently fetching 107 Yen, its highest rate in three weeks. With risk appetite returning to the market, we expect to see some stop losses triggered on the way higher before the pair settles down ahead of the US employment report.