All eyes are on the US Fed meetings happening this week and on US-China trade talks. The 'Ayes' were on sending UK PM Theresa May back to Brussels to attempt to convince EU leaders to amend parts of the Brexit deal. Contentious points included the backstop on Northern Ireland, while the amendment to extend Brexit past March 29th was voted down. 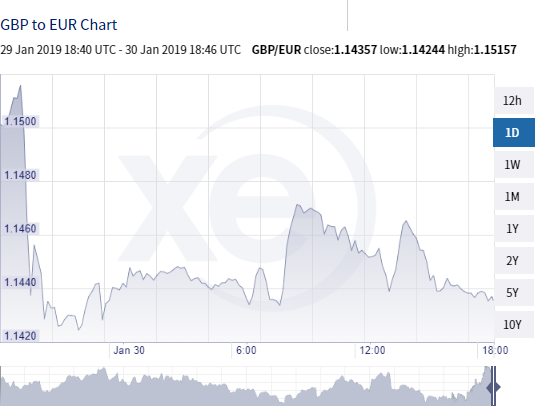 The tense, ongoing trade talks between   the US and China are getting tenser, as the DOJ files criminal charges against Chinese telecommunications giant Huawei. Despite this tension, the USD has held firm against the euro and the pound, following ADP non-farm job gains of about 213,000, beating the 185,000 forecast. USD/EUR closed at 0.87569.

PM Theresa May and her parliamentary colleagues are optimistic she can get EU leaders to bend on some terms, and they can eke out a deal before March 29th. This optimism seems to be propping up sterling against the euro. GBP closed at 1.143 after touching a high of 1.151.

EU Chief Negotiator Michel Barnier said he and the European leaders stand behind the agreement which they negotiated with PM May. There seems to be no appetite for amendments. German consumer confidence reports were stronger than expected. January Eurozone consumer confidence, however, sunk from 107 in December to 106.2 for January.

The Canadian dollar is a top performing currency this month, strengthening nearly 3.80% against its US counterpart. The latest rally comes on the back of dovish message from the Federal Reserve.

The Fed has decided to keep its monetary policy unchanged today, adopting a “wait and see, cautious approach.

The CAD is also receiving support from strong crude oil prices: NYMEX WTI is flirting with an eight-week high close to $54.20 a barrel. If you are waiting for pay invoices in US demomination, this is a good opportunity to leverage the recent strength of the Canadian dollar.

US-China trade talks started anew today, which continues to weigh on AU and AZ currencies. The AUD rose on the back of higher-than-expected inflation of 1.8%, and the CPI index increase by 0.5%. Tobacco, food, and recreation saw the highest price increases.

The Chinese Yuan hit a six-month high, as  two days of US-China trade talks kicked off today in Washington. After USD/CNY touched a high of 6.97, it closed at 6.716. USD JPY closed at 109.459 despite stronger-than-expected retail sales. Consumer confidence waned in recent data.