Sterling recovered some ground following stronger than expected retail sales in the UK. Michel Barnier suggested the EU could negotiate the Irish backstop.

We have seen the pound strengthen this morning following comments from the EU’s Chief Negotiator Michel Barnier stating that they are ready to work on alternative arrangements for the Irish Border. This comes ahead of a Parliamentary Vote later today aimed at reducing the probability that Boris Johnson can suspend Parliament and force through a no deal Brexit. UK retail sales figures released today are stronger than expected, showing growth against the forecasted contraction.

At the time of writing, this has resulted in the pound reversing this week's earlier losses. How much momentum is in this move remains to be seen, but indications that the EU are willing to flex a little is positive for the pound. As would any legal challenges or changes in government procedure that reduce the probability of a hard Brexit. 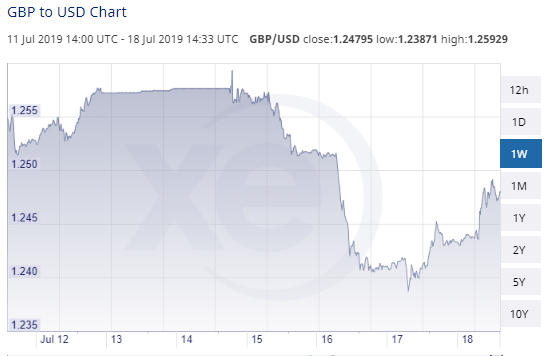 The US Dollar Index (DXY) is back to the 97.20 range, as the Philly Fed Manufacturing Index returned above estimates at 21.8 for July, up from June's 0.3. The greenback has struggled this week after President Trump indicated concerns about how negotiations are faring between the US and China trade delegations. The DJI, NASDAQ, and S&P 500 stock markets are down in early trading, led by weak earnings reports from Samsung and Netflix.

Positive signals around potential US-Iran negotiations are weighing on the price of oil, as WTI Crude is priced at US$56.64 a barrel, down by 0.14 today.  Gold is also down by a couple of dollars to $1,424.10 an ounce. US Treasury Secretary Steve Mnuchin said he does not foresee any change to US monetary policy in the near future.

EUR GBP is now just under 0.90 following a ray of sunshine on the pound which emanated from better-than-expected retail numbers, and news that the EU is willing to revisit Brexit terms on the backstop between Northern Ireland and the rest of Ireland in respect to trade goods.

USD CAD sank on news that the Canadian Price Index lost steam, and came in at 2.0%. The pair has support around the mid 1.3000s, yet news that manufacturing sales weren't as strong as predicted is not doing the loonie any favours.

Australia's positive jobs report has boosted the AUD USD to near the 0.7045-50 supply zone. Good news on the labour front could give the Reserve Bank of Australia the breathing room it needs to hold interest rates in the near term, and strengthen the Aussie at the same time.