Sterling Pulls Back from Recent Highs

Sterling pulled back from recent highs as investors booked profits. Uncertainty still remains and will continue until it is clear how the UK will leave the EU and on what terms. The focus now on what becomes the Plan B (or is it Plan C?) 12 March in the UK. 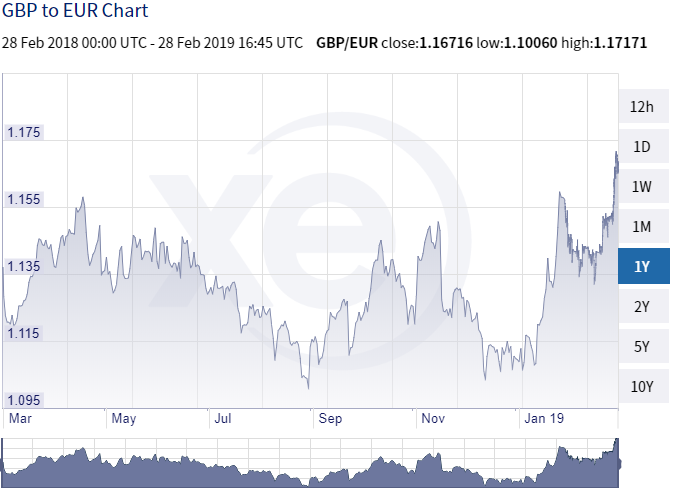 The dollar, having weakened over the last few sessions, rose against the yen and reduced losses against the euro on Thursday following the release of GDP data. This data showed that growth was stronger-than-expected in the fourth quarter, posting an annualised growth rate of 2.6%, against expectations of 2.3%. This data confirmed the Fed's comments that the US economy is still growing at a solid pace.

The pound pulled back from recent highs, having rallied over the last few days as markets bet a no-deal Brexit is less likely. However, uncertainty and downside risks for GBP still remain as the market now looks to the ‘meaningful vote’ on 12 March.

The Euro was up against the US dollar, hitting a 3-week high. As US-China trade talks are hopefully coming to a favourable agreement, Eurozone car manufacturers are concerned about pending US tariffs on automobiles from countries like Germany. The automotive industry is already experiencing flagging momentum, and duties would only further diminish sales.

The Canadian Dollar lost ground on Thursday, as US GDP surprised with a better-than-expected reading. Canada’s current-account deficit widened to CS15.5 billion. Weak consumer spending in December and the prospect of soft inflation are making it difficult for the Bank of Canada to build a case for raising interest rates.

The Aussie dollar was on the backfoot on Thursday after disappointing data on Chinese manufacturing (lowest level in 3 years) and data which showed export orders fell to levels not seen since the global financial crisis. The Aussie Dollar dropped to $0.7142 against the greenback.

The South African rand continued to weaken amid ongoing geopolitical tensions abroad and uncertainty over the US-China trade deal.

Moving funds between international accounts?
Sign up for XE Money Transfer and transfer money online 24/7.
You get free online quotes, so you know your costs before you book a transfer