The British Pound is trading firmer, jumping 60 pips after the UK Supreme Court ruled the prorogation as “unlawful”. President Trump speaks before the UN.

The British Pound is trading firmer, jumping 60 pips after the UK Supreme Court ruled the prorogation as “unlawful”. WTI crude oil prices are sliding lower, 1.2% down on the day with expectations of lower global demand and economic growth. 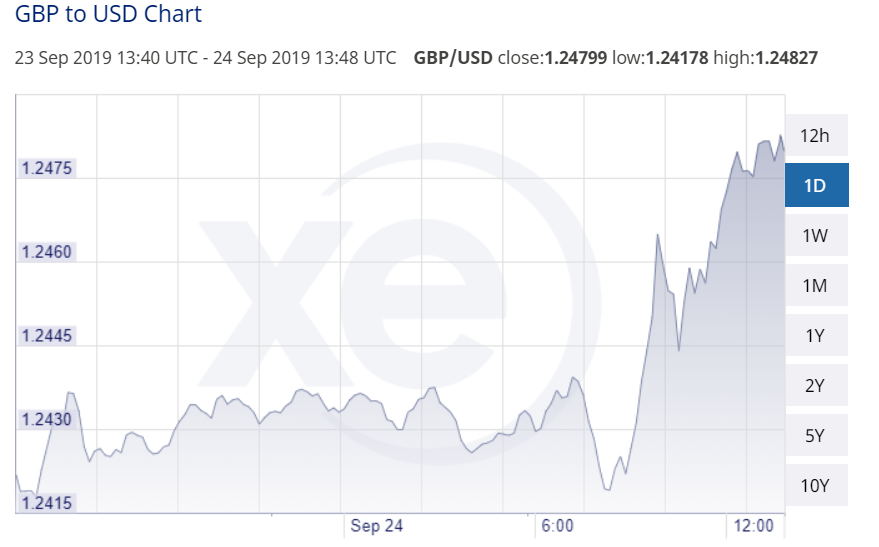 The greenback is holding onto recent gains against a basket of major currencies buoyed by reports of improving trade relations between the US and China. More US soybeans shipments towards mainland China are seen as positive outcomes following recent deputy-level negotiations. The market now looks forward to furthering principal-level meetings in October, hoping for an agreement to be inked between the two nations.

Today, the US economic slate includes house prices, Richmond Fed manufacturing index and Conference Board consumer confidence survey. Not much to trigger a major move from current levels. Apart, of course, from how President Trump performs at the UN Meetings while growing calls for his impeachment over the latest scandal involving Ukrainian military aid.

Sterling rose to the session high (1.2488) after the unanimous decision of all 11 Justices of the UK Supreme Court declared the prorogation of the Parliament as “unlawful, void and of no effect and should be quashed”. GBP/USD once again continues to be driven by developments surrounding Brexit. UK is expected to leave the EU on October 31st and it is a race against time to concoct a new Withdrawal Agreement. Parliament is set to resume, and we expect all the political dramas to inject a new wave of uncertainty.

EUR/USD remains within touching distance of key 1.10 post, receiving temporary support from slightly better-than-expected German IFO. The survey index improved from 94.3 to 94.6 but the outlook for coming months remains bleak. After yesterday’s dismal PMI report (Eurozone demand for goods and services declining at its fastest rate in 6 years), the market welcomed improvement in the current situation but are cautious about going forward. We expect the shared currency to trade with negative bias and could challenge the lows of September 12th.

USD/CAD is flat around the mid-point of 1.3200s. The market sees no hurry to move outside 1.32 -1.33 trading range. In the absence of any major data releases from Canada, we expect further consolidation. It, therefore, leaves the pair vulnerable to external factors and should see some volatility kicking in towards the end of the week.

AUD USD climbed above 0.68 today after the RBA seems to be preparing for an October interest rate cut. RBA Governor Lowe, in a meeting of the Armidale business chamber, discussed how a prolonged period of eased economic policy and low-interest rates would be required to keep inflation, employment and economic growth in positive territory.

The US dollar halts a three-day decline as the market sees improvement in US-China trade relationships. The market now waits for the release of the latest Bank of Japan’s monetary policy meeting minutes for further trading impetus. The central bank is expected to join other peers in loosening its policies over subdued growth. Spot dollar-yen is trading 0.1% up at 107.70 and is expected to trade along with the broad-based market sentiment.