Sterling hits a 5-month high against the US dollar in early trading. The US Dollar is weaker after the Fed chairman's dovish testimony is set to continue today

Global safe haven currencies like the Japanese Yen and Swiss Franc have gathered significant flow today after Pakistan shot down two Indian fighter jets - this pushed traders into "risk off mode" and drove them to sell riskier currencies and buy safe havens. 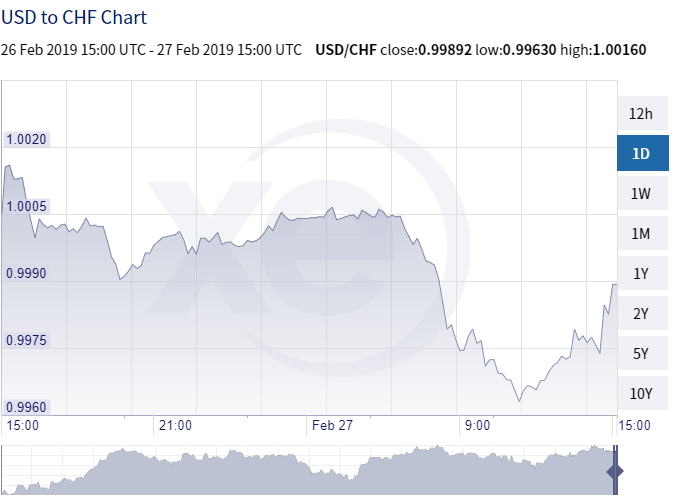 The US dollar has weakened against a basket of currencies today after it weakened yesterday. Fed chair Jerome Powell cited global growth concerns and Brexit as external factors influencing the US economic situation. He again said the Fed would be patient in its approach to increasing interest rates, contributing to the selloff of the dollar.

The pound has continued on its ascent higher as the markets bet on a no-deal Brexit seems less and less likely. Prime Minister Theresa May has laid out a plan for the 12th, 13th and 14th of March for the next steps in the process. However, in the meantime, Michel Barnier has again made it clear that the backstop agreement is not up for negotiation. The pound has moved higher very quickly and could be vulnerable to retracement if sentiment shifts on the Brexit outlook.

The euro has started the day on the back-foot as a senior ECB member comment on the Italian Debt situation - the Debt to GDP ratio is now only better than the struggling Greek economy. This creates a significant concern for the European economy.

The Canadian dollar has followed other commodity currencies weaker as after the Pakistan/India incident. The price of crude has also dipped in the past week, which impacts the loonie. Canada's key inflation indicator is expected to gain 0.2%, after two months of declines. On Thursday, the U.S. will post Advance GDP and unemployment claims. Canada will release the current account and the raw materials price index.

The Aussie dollar has weakened today after risk sentiment shifted and traders have moved away from risk currencies. Construction spending also unexpectedly fell in Australia - a clear piece of evidence that the domestic economy is struggling.