The greenback is up by 0.1% against G-10 currencies. USD/CAD returns to familiar ranges buoyed by higher oil prices and weaker USD sentiment

The Reserve Bank of Australia delivered, as widely expected, a 25 basis point rate cut earlier this morning. After more than three years, the Bank lowered its cash rate to 1.25%, as downside risks from trade tensions have increased. The dispute between the US and China is expected to have far-reaching effects, and to weigh on the economic fundamentals of the Australian economy. The AUD showed little immediate reaction to the announcement. The move was well telegraphed but we expect the AUD/USD to remain highly volatile. 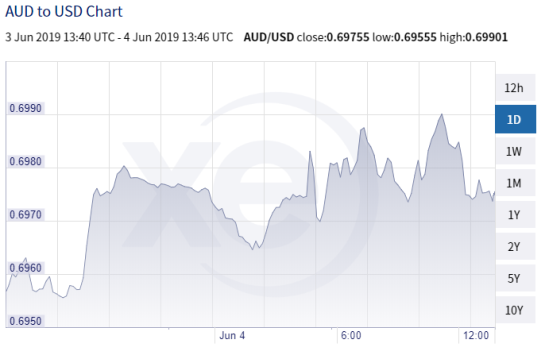 The Dollar Index is making a minor recovery after the greenback touched its lowest level in seven weeks against other major currencies. Market sentiment remains fragile, with the US fighting trade wars on several fronts. Investors are cautious ahead of Fed Chair Powell’s speech and the release of durable goods orders. There are already signs of strain building in the economy – ISM manufacturing PMI declined to its lowest reading since October 2016. Dovish comments from the Fed may also weigh further on soft US dollar sentiment.

The mini-recovery of the Pound has stalled, as market attention remains glued on political uncertainty and weak economic readings. Investors wait for the next PM to navigate the exit from the EU. On the data front, the UK Construction PMI dropped into contraction territory with a reading of 48.6 points. This follows yesterday’s poor manufacturing PMI which slumped to a 34-month low. This is the sharpest decline in construction output since March 2018.

The Euro is in reversal mode today, after surging nearly 1% yesterday. Inflation numbers disappointed the traders which prompted some take-profit selling activities in the market. According to Eurostat, euro-area annual inflation dropped to 1.2% in May, down from 1.7% in the previous month.  Core inflation, now at 0.8% was below the market consensus. The ECB meets this Thursday and is unlikely to announce any major shift in its monetary policy.

USD/CAD falls further for the third successive session, trading near the lower end of recent trading ranges. Comments from St. Louis Federal Reserve president Bullard did little to support a sliding greenback. He opined that a rate cut, a shift in current monetary policy should be the next move as the economic landscape is changing. Meanwhile, the mini-revival of the CAD could be attributed to some steady flows in the oil futures market. There is no economic data on the slate today and we expect the pair to consolidate at current levels.

The Reserve Bank of Australia delivered on what was expected in the Asian session, and they cut the Aussie prime interest rate by a quarter point to 1.25%. AUD USD is now at 0.69888 following Bank Governor Lowe's comments that further rate cuts weren't out of the realm of possibility.

The greenback came under pressure after Fed Bullard turned dovish, signalling a rate cut could be on the cards sooner than expected. With US Treasury yields and data remaining soft, the US dollar is expected to trade with a negative sentiment. Trade tensions with several trading partners are also adding to the pressure. USD/JPY is on a rebound after testing the waters below the 108 mark. Safe-haven flows still remain the primary driver.