It remains to be seen whether British PM Theresa May can convince EU leaders to concede to amendments to the Brexit divorce agreement. Of particular concern is the threat of what DUP Leader Arlene Foster calls "the toxic backstop" to Northern Ireland.

PM May pledged to leaders in Belfast that she will do everything possible to secure a deal which British parliamentarians will support. She seems to have the   support of German Chancellor Angela Merkel, who said EU leaders CAN amend the separation agreement to support Theresa May. 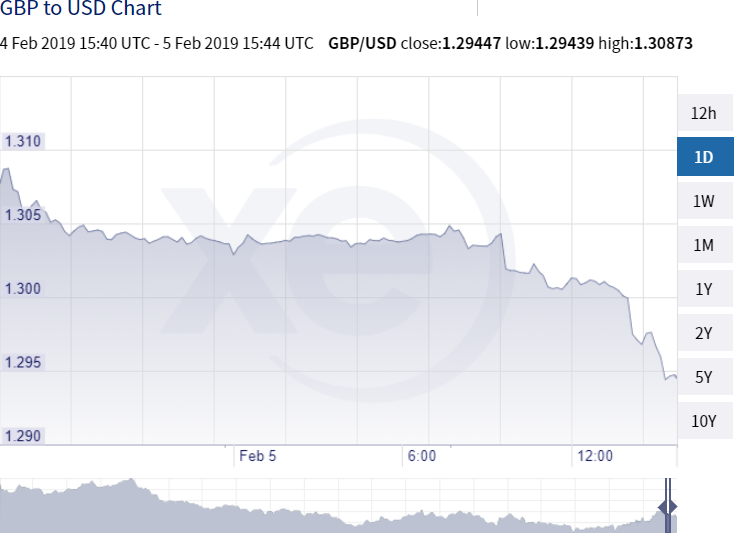 Most of Asia is on holiday this week to celebrate the Lunar New Year. As President Trump prepares to give his State   of the Union address in Speaker Nancy Pelosi's House of Representatives, and Fed Chair Powell prepares for a speech tomorrow following FOMC meetings last week, the greenback is generally in wait-and-see mode. US-China trade tensions continue and poor manufacturing sales numbers from November are also weighing on the USD.

A dour PMI Index report pushed the sterling lower in today's trading. GBP USD touched a high of 1.30873 before sinking to 1.29447.

Good news for Germany, as their PMI Index report hit a better-than-expected 53.1, though the Eurozone report held on at 51.2. Recent retail numbers are disappointing in both the Eurozone (a drop of 1.6%) and Germany (plummeted by 4.3 to their lowest levels in a dozen years.) The euro did rise slightly against GBP though, closing at 0.88162 after starting trading at 0.87137.

Due to a quiet day in Canadian economic   news, the loonie is in limbo today. The Canadian currency has been mostly   unchanged this week, after rising as a result of rising oil prices. WTI Crude Index has faded a bit lately and now sits at 54.47. The Canadian Crude Index is up slightly though, up 0.29% to 42.15. BP CEO Bob Dudley is optimistic oil prices should hold firmer this year than last. USD CAD is hovering around 1.31.

Announcements out of the Reserve Bank of Australia were generally upbeat. They predict gradual lifts in inflation over the next couple of years, and they left the interest rates at 1.5%.

As currency traders have regained their   taste for riskier bets, safe haven currencies including the  Swiss franc have lost their lustre of late. USD CHF now sits at 0.99992, down from 1.00162. Currency investors are hoping for good news out of the US-China trade talks, which is causing a slide in currency's value   against the USD and the AUD, to name a few.

Moving funds   between international accounts?
Sign up for XE Money Transfer and transfer money online 24/7.
You get free online quotes, so you know your costs before you book a   transfer.