The US economy added about 130,000 jobs, The Canadian dollar climbed for the third consecutive session after 81,000 new Canadian jobs were added.

Yesterday saw hopes of a de-escalation slow to an almost grinding halt, after yet another defeat for Prime Minister Boris Johnson at the hands of a parliamentary Liberal opposition strengthened by rogue MPs originally elected to the Conservative Party.

The opposition and its allies have voted to force the Prime Minister into requesting another extension of the Article 50 negotiating window, tying his hands in negotiations with the EU and opening a constitutional can of worms. If it seems like you've been on this ride before, and this is all a deja vu, you're right. 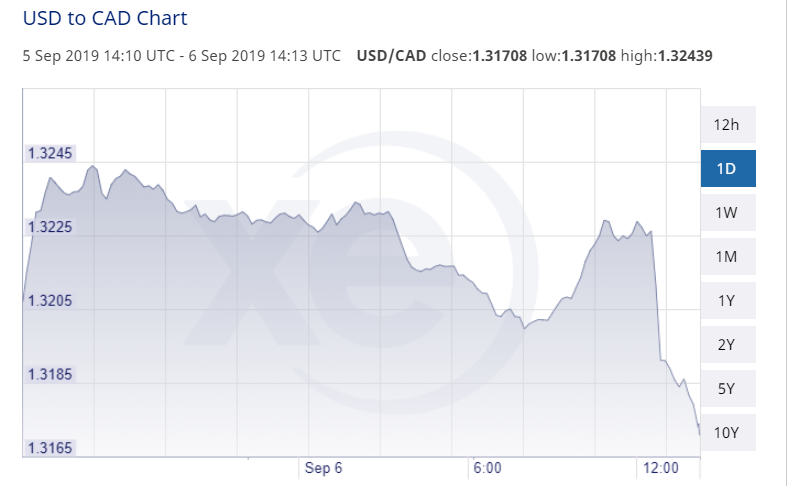 The greenback is showing little reaction after the US total nonfarm payroll employment rose by 130,000 in August, and the unemployment rate stayed at 3.7%. The headline number was below the market estimate of 163k. Last month, the average hourly earnings rose by 11 cents following 9-cent gains in both June and July. However, the market remains cautious ahead of Fed Chair Powell’s speech at 12:30 ET and which could trigger more trading activities. Commodity-linked currencies are the top performers of the day.

The spot market for the single currency is range-bound, after failing to pierce the 1.11 barrier. As expected, investors prefer to avoid heavy directional bets ahead of the US job report and ECB meeting. There are increasing expectations that Draghi will make an announcement on the new QE measures. The German economy continues to spew disappointing data: industrial production fell 0.6% in July over the previous month.  The revised Q2 EU GDP growth was flat at 0.2% compared to a 0.4% growth in Q1. With the US Dollar Index bouncing back from yesterday’s lows, we expect the Euro to remain confined within a tight trading range today.

The Canadian dollar has strengthened over the past three sessions against the greenback following a no-change rate announcement from the Bank of Canada. Investors were met with a surprisingly strong employment report card. Following three consecutive months of flat performance, the economy added 81k new jobs in August. The market was pricing in the growth of 18k. The unemployment rate remained at 5.7%. Backed with strong economic fundamentals, we expect the central bank to have a new headache next month on whether to buy the insurance rate cut or continue with its patient hold

AUD USD continues to climb higher in positive territory, pushed higher on Friday when China's central bank announced a 0.5% cut to the reserve requirement ratio (RRR) as an economic stimulus strategy. The pair is currently up to 0.68531.

USD/JPY is steady around the 107 mark, after touching its highest level in five weeks carried by risk-on appetite. The pair now waits for the NFP report. Fed Chair Powell is also due to deliver his speech on monetary policy and economic outlook at 12:30 ET and which could inject some trading impetus in the market. It is very unlikely he will depart from his recent stance, which is that monetary policy tools may have limited impact in the environment of the escalating trade war.