The currency market completely ignored the latest inflation numbers from the UK, and instead, is focussing on the Brexit chaos.

The currency market completely ignored the latest inflation numbers from the UK, instead focussing on the Brexit chaos.

The pound sterling dropped to its lowest level in four months, after reports surfaced that MPs are likely to reject the proposed “new Brexit” deal. Failure to reach a cross-party agreement and ongoing uncertainty mean the options for a no-deal exit, new referendum and a general election are all options which are in play. Theresa May said if MPs vote down this agreement, they are voting to stop Brexit. 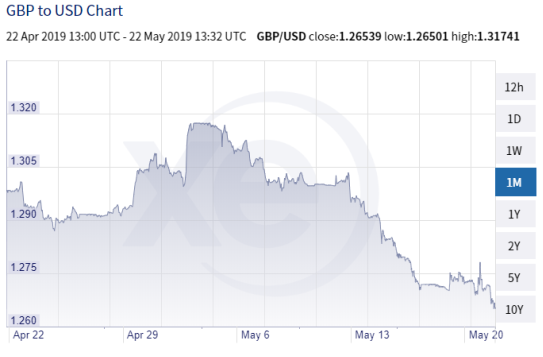 The US Dollar is trading in negative territory this morning as trade tensions continue to hog the limelight. Investors are seeking the safety of safe haven currencies in CHF (up 0.4%) and Yen (+0.2%).  Aside from trade, the market will also keep an eye on the minutes of the May FOMC meeting. The US economy has generated signals of strength on a consistent basis, over recent months, with solid labour market but inflation is running below the target 2%. However, international trade relations are expected to be a major headwind and could weigh on medium-term sentiment.

Across the pond, the Pound Sterling records a new four-month low against the greenback. “New Brexit” the deal failed to impress the MPs and as aptly put by Prime Minister May, “The the biggest problem with Britain today is its politics.” Unfortunately (or fortunately) May is a politician, so she may want to/have to look for a new job.

The pound sterling succumbs under heavy selling pressure to four-month low and is trading 0.4% lower on the day. The move was triggered, not surprisingly, amidst criticisms and calls from the MPs for Prime Minister May to resign. The latter’s statement on the “new Brexit deal” in some ways borders on defeatism. The market is pricing in yet another defeat for the PM should the deal be tabled for a fourth vote. A general election, a second referendum that could revoke Brexit altogether and a hard No-Deal exit remain the next options.

EUR/USD has not moved far away from yesterday’s close, exchanging around the mid-point of 1.11. The pair waits for clear direction against a backdrop of escalating uncertainty due to global trade tensions, Brexit chaos and the EU election which could shake local politics. The pair showed no reaction to an earlier speech by ECB Chief Draghi and is expected to move with caution.

The US Dollar-Canadian dollar pair broke below recent trading ranges with the loonie on a high, generating power from better than expected retail sales numbers. Sales were higher in 7 of the 11 sectors in March, up 1.7% versus market consensus of an increase of 0.8%. Cannabis sales were up 17.2% during Feb-March. We expect the pair to settle ahead of the FOMC minutes.

The Australian Dollar is trading in the mid 0.68 range and could sink lower following the release of the FOMC meeting minutes.

The US dollar is losing momentum and trading in negative territory against the Japanese Yen. There are reports that the Trump Administration is pondering on moves to extend sanctions on other Chinese tech companies. The move could lead to more retaliation and shift trade talks off the orbit. USD/JPY is expected to trade with renewed cautious ahead of Fed minutes.